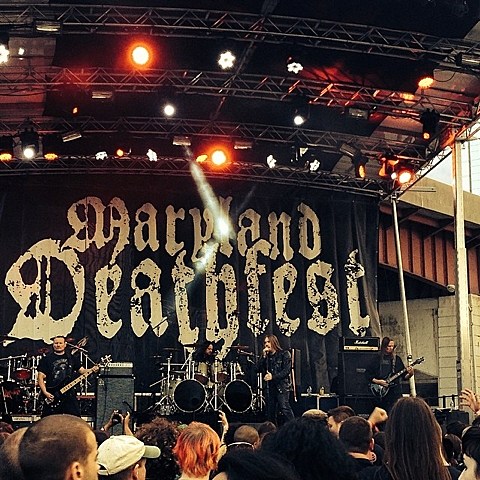 Maryland Deathfest XIII happens May 21 - 24, 2015, and today the first round of confirmed bands were announced. 32 in total were listed to whet the appetites of early birds interested in snatching up their tickets when they become available on Saturday, July 19 at 3 PM EST through the Maryland Deathfest website. The bands include such heavyweights as Neurosis, D.R.I., and Triptykon, who missed this year's fest due to the passing of H.R. Giger. Triptykon leads a number of bands who will be making MDF their exclusive US appearance in 2015. Others include Australia's Portal, Sweden's Wolfbrigade, and Norway's Arcturus. The full list that's full of pleasant surprises -- Hello, Bulldozer! Hello, Melt-Banana! -- appears below.

So, while the bill will look different, the venues will remain the same. Per the promoters:

The full list of bands along with the trailer for Welcome to Deathfest that documents the 2013 event and screens in NYC soon, below...