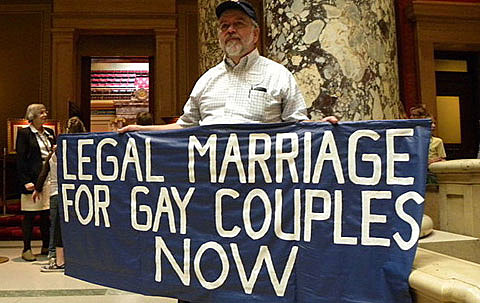 Though there seems to be some dispute at the moment about who is "first", history was made Tuesday (for more more than one reason). Baltimore Sun reports:

Maryland made history yesterday as the first state to approve gay marriage at the ballot box. The outcome on Question 6 was notable not just for what it will mean for thousands of gays and lesbians whose relationships will now be recognized as equal to those of their heterosexual peers but for what it says about the state of gay rights in America. There is good reason to believe that yesterday's vote was not just a victory for equality but a turning point.

Technically, Maryland appeared to be tied for the first-in-the-nation distinction, as a similar measure was poised for passage in Maine on the same day. Another was on the ballot in Washington. Considering that the electoral record for same-sex marriage up until yesterday was 0 wins and 32 losses, those victories are remarkable. The vote in Maryland in particular is a sign that the growing acceptance for marriage equality is starting to break down old barriers and may portend a rapid shift in the political and legal landscape.

Maine voters approved same-sex marriage in an election night that jubilant gay rights advocates called a historic turning point, the first time ever that marriage for gay men and lesbians has been approved at the ballot box.

While six states plus the District of Columbia have legalized same-sex marriage through court decisions or legislative decisions, voters had rejected it more than 30 times in a row up to now.

Results for the other three states voting on same-sex marriage -- Maryland, Minnesota and Washington -- were still coming in late Tuesday but rights groups said that the victories in Maine, and possibly other states, were an important sign that public opinion is shifting in their direction.

As of this article, results are still just coming in, so hopefully by Wednesday morning we're saying that four states approved same-sex marriage on ballots in 2012.

UPDATE:: Minnesotans have sadly defeated the attempt to amend the state's constitution to ban gay marriage,

This election also gave us our first openly gay senator, our first state with marijuana legalization, and our first two-term African-American president. To quote Reggie Watts, "The Mayan prophecy is coming true!!!"