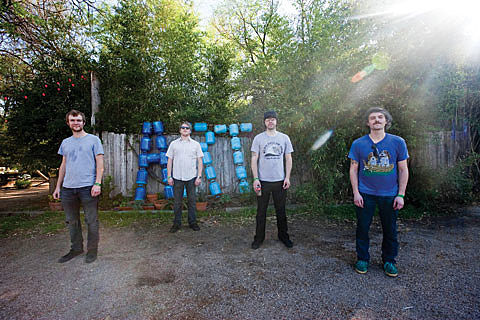 Shrinebuilder and Maserati have very little in common, musically speaking. One relies on bluesy/sludgy riffage and post-metal roar, while the other is more concerned with muscling you out on the dancefloor. Yet both have absolutely incendiary live shows and now, both have killer songs called "Pyramid Of The Moon".

I've been a long-time fan of Maserati's spacey kraut-rock dancefloor-FONK and I'm excited for new material which will come soon in the form of a limited-edition 12" for "Pyramid Of The Moon". The song, and alternate version of the title track from the band's forthcoming album (!) Pyramid of The Sun, is available in edited form, for the first time, above, and will appear in all its extended nine-plus-minute glory along with a remix by The Field on the 12". Preorder it.

The new LP will include some of the final recordings of Jerry Fuchs, whose untimely passing left the band and the Brooklyn music community shaken. The LP, mixed with Justin Van Der Volgen (!!!, Out Hud, TBD) and Temporary Residence Limited founder Jeremy deVine (Sonna), includes collaborations with Steve Moore (Zombi) and will hit store shelves on 11/9. Make sure and check that out, it definitely cooks.

And speaking of !!!, openers have been announced for their upcoming 2-night run at Music Hall of Williamsburg. Fol Chen and Midnight Magic open the 11/6 show. Onra and Pattern is Movement play support on 11/7. Tickets (including the 2-day pass) are still on sale.