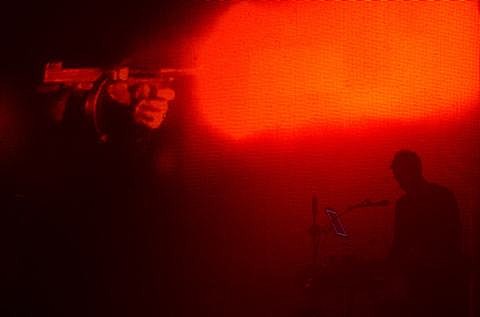 1,500 people are surrounded on three sides by huge translucent screens on which Curtis's dystopian film essay, Everything Is Going According to Plan, is projected, using all the digital drama of Massive Attack's regular technicians, United Visual Artists. At the far end the band provide the live soundtrack to the footage - mostly powerfully driven cover versions, ranging from Siberian punk to Barbra Streisand - and occasionally emerge from the shadows to become part of the film itself. The audience, many of whom have come to dance, stand pretty much motionless throughout, rapt or trying to keep up with the dizzying and seductive images that Curtis presents and sometimes sonorously narrates. From time to time you are reminded that this is a musical as well as a visual adventure - particularly when guesting Liz Fraser, once of the Cocteau Twins, steps forward to sing, with her rare dreamlike clarity, The Look of Love or later in haunting Russian - but mostly, even if the bass is making the walls shake, it is the film that overwhelms your attention. - [The Guardian]

Massive Attack V Adam Curtis, the cinematic / live music / thinkpiece assault, which first premiered at Manchester international festival in July, comes to NYC starting Saturday (9/28) and running for six performances: September 28 - 30 and October 2 - 4 at the Park Avenue Armory. Something we didn't realize when we first posted about it: both reggae legend Horace Andy and Cocteau Twins singer Liz Fraser(!!!) will be on hand to provide live vocals for these performances. The opening and closing night shows are sold out (9/28 & 10/4) but you can still get tickets to the other four shows. You can also still get tickets to the closing night afterparty which is a benefit for the Amory. For a taste of the sensory overload that is this show, you can watch the trailer below.

And if you'd like to go for free we're giving away a pair of tickets to the sold-out Oct 4 final performance AND the afterparty. Details on that, along with the trailer, are below.

======================
For a chance at winning a pair of tickets to see MASSIVE ATTACK V ADAM CURTIS AT PARK AVENUE ARMORY: either tweet something that includes both @BrooklynVegan AND "MASSIVE ATTACK" in the tweet, or send an email to BVCONTESTS@HOTMAIL.COM with the subject line "MASSIVE ATTACK". Include your first and last name in the email. We'll pick a winner at random and contact them with more details. If you enter by email, it will not be shared with anyone else. Good luck!
======================