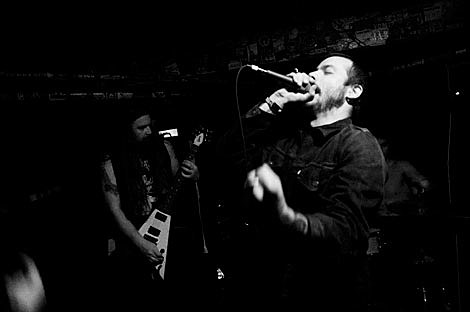 Bad news folks, Master has cancelled their US tour with Lightning Swords of Death & Mobile Deathcamp which obviously includes this week's show at Europa. Paul Speckmann has commented:

"We arrived Tuesday morning in Holland and after intense questioning we proceeded to the eye and body scan machine. Along with the other passengers, we proceeded to the plane. We arrived in Detroit and went to passport control. I waited for about two hours for any word on the guys. The police came to explain that the visa waiver program didn't apply to musicians. So they sent me to customs and proceeded to tear apart everything and sent me on my way. I waited for six hours to get on another airplane and return to Europe. Thankfully the lady at the Delta checkout counter was very helpful and confirmed that the guys would be on the next plane in the evening and I could return with them. The guys were escorted to the plane by four police officers and returned their passports when we arrived in Amsterdam. Since when are musicians and terrorists in the same category? Again I apologize to all the bands, organizers and fans of course. I guess the CD cover of the Human Machine CD has become a reality!"

No word on makeup dates, but we'll keep you informed. LSOD played Scion Rock Fest 2010, and the 2011 edition goes down this weekend.

A LSOD live video from Scion Fest below...