Masters of the Hemisphere 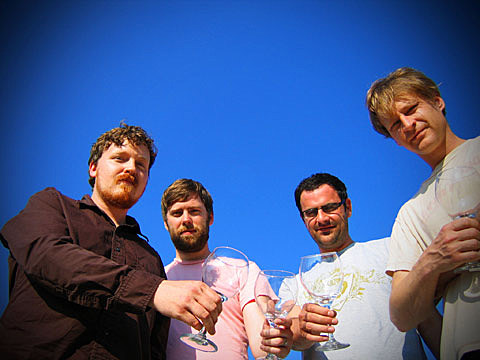 After a nearly ten-year absence, Athens, GA indie pop quartet Masters of the Hempisphere are back with a new album, Maybe These Are the Breaks, that's out October 4 on Kindercore/Magic Marker. We're pleased to premiere the album's lead track, "Eggshell," which you can download at the top of this post. The band will be touring soon too, stopping in NYC for CMJ: October 21 at The Rock Shop and October 22 at Bruar Falls.  All tour dates at the bottom of this post.

Masters of the Hemisphere formed in 1996, releasing three albums and a handful of singles and EPs before calling it quits in 2002. All four members  have kept busy and worked with each other since. Main man Sean Rawls plays in Je Suis France along with Master drummer Jeff Griggs (who was also in The Mendoza Line) as well as forming indie reggae conglomerate Still Flyin' which also includes fellow Master Bren Mead. Adrian Finch is in Atlanta band Night Moves Gold. Original, short-lived MOTH drummer Ryan Lewis continues to run Kindercore Records who released all of MotH's original records.

All four main members all back for Maybe These are the Breaks which might just be the best thing Masters of the Hemisphere have released. "Eggshell" is typical of the tunefull, ridiculously catchy pop contained within it.

Meanwhile, Modern Country is reissuing Masters of the Hemisphere's catalog -- all of it, including the new album -- as a box set of cassettes. Only 100 are being made.

Meanwhile meanwhile... Rawls and Mead's Still Flyin' are still flying, and will be in NYC at the Start of next month: they play Glasslands on Oct. 7 (with Dinosaur Feathers, Crush and The Gytters) and Cake Shop on Oct. 8 (with German Measles, Bright Lights and Love Connection).

All tour dates for Masters of the Hemisphere and Still Flyin' are below.