Mastodon in Chicago in May (more by James Richards IV) 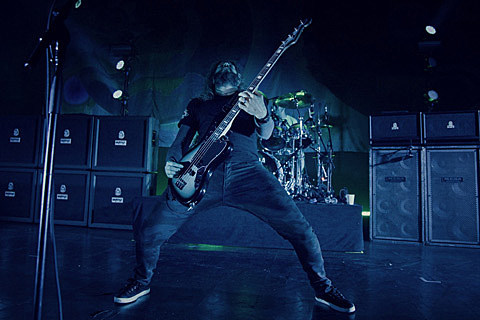 The newest installment of the Adult Swim Singles series comes from Mastodon and Gibby Haynes of Butthole Surfers, who have teamed up for the track "ATLANTA." If you thought getting Gibby involved would make Mastodon sound a little dirtier than their other recent material, you'd be right. It's a scummy, no-frills rocker and you can stream it below.

Mastodon have another tour with Gojira and Kvelertak coming up, which hits Long Island on Halloween and NJ a day later.

Gibby was also on the Q&A at our recent screening of City Gardens documentary Riot on the Dance Floor and then he DJed the afterparty at Bowery Electric. You can check out pictures from the Q&A on Facebook. Gibby's Butthole Surfers bandmates Paul Leary and JD Pinkus have been busy with another sludge metal band this year, Melvins, whose new album (stream a track) they are featured on.