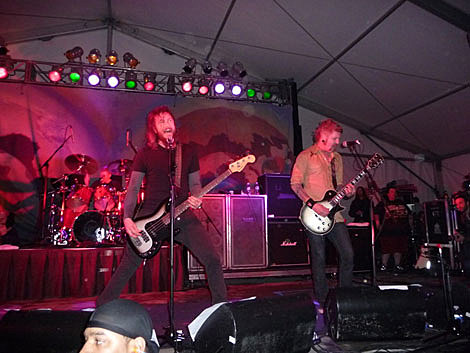 Less than 36 hours after Mastodon left the stage at Scion Rock Fest where they played a few tunes with Scott Kelly of Neurosis (!!!), the band announced a tour that includes a NYC date at Irving Plaza (May 9th, tickets on sale soon) and a Brooklyn show at Music Hall of Williamsburg (May 10th, presale starts Wedesday). All dates will include Kylesa (who was also at Scion) AND Intronaut. Both openers will be coming off of their tour with The Haunted and Nachtmystium. 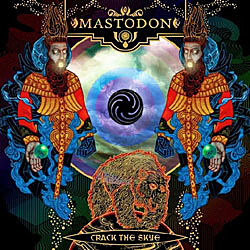 During the April & May North American trek, the Atlanta crew will play all of their upcoming album Crack The Skye (out March 24):

The complete album performance is something new for the group, says guitarist Bill Kelliher, but "there's something about [the album] where it would be weird to leave a song out. We'll incorporate a whole stage show, which will hopefully make it even more exciting for kids to come see and more visually stimulating." The band is also hoping to make a short movie from all the songs, which Kelliher predicts will be Mastodon's version of "The Wall." -[Billboard]

Word is that the band have employed Josh Graham to incorporate visuals into their stage show, similar to Neurosis and A Storm of Light's projection show. Billboard also got more of a straight story on the record's concept

"It's about a crippled young man who experiments with astral travel. He goes up into outer space, goes too close to the sun, gets his golden umbilical cord burned off, flies into a wormhole, is thrust into the spirit real, has conversations with spirits about the fact that he's not really dead, and they decide to help him. They put him into a divination that's being performed by an early-20th-century Russian Orthodox sect called the Klisti, which Rasputin is part of.

"Knowing Rasputin is about to be murdered, they put the young boy's spirit inside of Rasputin. Rasputin goes to usurp the throne of the czar and is murdered by the Yusupovs, and the boy and Rasputin fly out of Rasputin's body up through the crack in the sky and head back. Rasputin gets him safely back into his body."

"That's the basic story," he [Brann Dailor] says, "but it's all metaphors for personal sh*t."

Oh word? See if you can decipher more at the Crack The Skye website.

A Storm Of Light recently played Europa with Amenra & Zoroaster.

All Mastodon shows go on pre-sale on Wednesday (password = CracktheSkye), and then regular sale Friday. All dates on this "intimate" tour are below...

"MASTODON will tour Europe with Metallica this summer. In addition, they have been invited to perform as part of the Sonisphere Touring Rock Festival this summer in Europe and the UK with Metallica, Linkin Park, Slipknot, Lamb of God and more."