The Men at Bowery Ballroom in November (more by BBG) 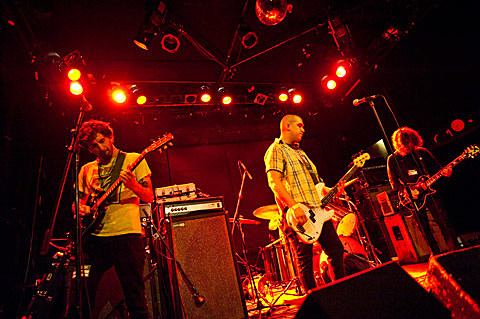 Matador Records is presenting the Singles Going Home Alone Subscription Series for 2012, where you will get

6 subscription only 7"es every other month in 2012, plus a special secret bonus item, a tote bag and 10% off all year long on the Matador Store (which cannot be combined with other discounts, email with code will arrive around time of the first single)

The first installment is a split 7" between Stephen Malkmus and L.A. Guns, which will feature Malkmus taking on the L.A. Guns track "Wheels Of Fire" and L.A. Guns will cover "Gorgeous George" off Malkmus's most recent LP, Mirror Traffic. That comes out on January 17. It will be followed by a 7" from OBN IIIs on March 20 and another from The Men on May 22. The remaining three are TBA and will come out on 7/10, 9/11, and 11/6. You can subscribe to the series at Matador's site. The list of releases is below.

Speaking of The Men, they just announced a new album due out in March and a tour in support of it which includes SXSW and 285 Kent on March 7 with Nude Beach. They have since added another NYC show happening much sooner at Union Pool on January 13 with Pygmy Shrews, Organs, and Call of The Wild (ex-Awesome Color). All dates and Matador singles series list below...