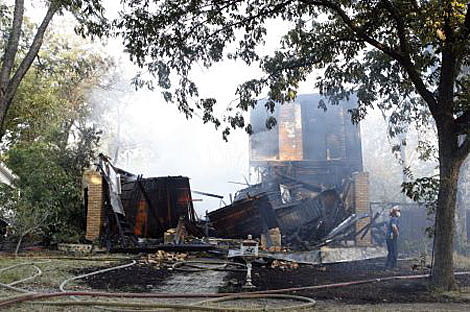 Matador Records co-owner Gerard Cosloy was the owner and resident of a nearly 100-year-old home on Lindell Avenue [in Austin] that burned to the ground early this morning.

Cosloy and another person escaped a fire this morning at the home near the intersection of South Congress Avenue and West Live Oak Street, said Austin fire Captain Andy Reardon.

Fire officials received the call about 3 a.m., Reardon said, and crews arrived to find the entire house on fire. Police had to alert the people inside the home that it was on fire, Reardon said. The 3,888-square-foot home, which is estimated to be a total loss, was evacuated safely.

The two-story house was built in 1911, and is located in the Bouldin Creek neighborhood.

Officials said the fire did about $500,000 worth of damage. The cause is still under investigation, officials said.

Cosloy sounded shaken but calm this morning. "There are a lot of people who have a lot less than I do who deal with a lot worse, but this is pretty bad," he said.

Cosloy worked out of his home." [Austin Statesman]