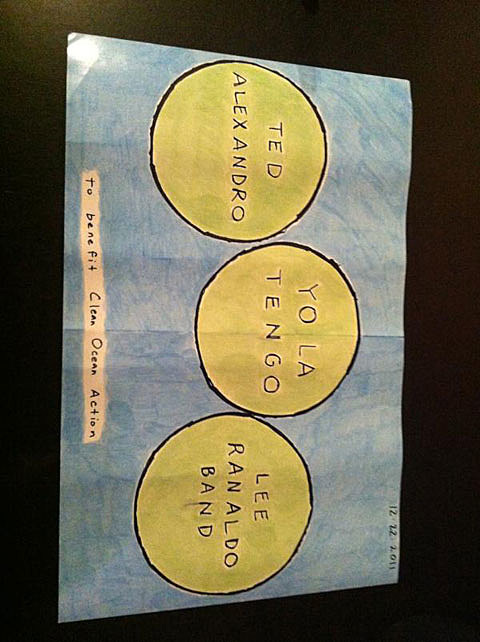 The Lee Ranaldo Band and comedian Ted Alexandro opened the third night of Hanukkah for Yo La Tengo at Maxwell's. Lee, Steve Shelley, and Alan Licht, who is also in Lee's band, joined Yo La Tengo for a number of songs in the latter half of their set, including a cover of Sonic Youth's "Mote," which Lee sings lead on. In the encore, Yo La Tengo covered John Cale's "Andalucia" and Barry Manilow's "Mandy," the latter of which they were joined by John Cameron Mitchell on vocals. Check out the full setlist via Frank & Earthy below.

Who will open the fourth show tonight? Spent reunited for the second night. The setlist from that show is below too. We posted the first night's setlist HERE.

Speaking of Lee Ranaldo, he's working on his solo album called Between The Times & The Tides, which will be out March 20 via Matador. As mentioned, his live band includes Alan Licht, Irwin Menken, and SY bandmate Steve Shelley. All three members contribute to the album in addition to Sonic Youth collaborator Jim O'Rourke, Nels Cline, John Medeski, Bob Bert (who drummed in SY before Steve Shelley joined, and was also in Pussy Galore who are rumored to be opening one of the YLT shows), Lee's wife and longtime collaborator Leah Singer, and Kathy Leisen. The album was produced by Lee Ranaldo and John Agnello, who produced Sonic Youth's most recent album, The Eternal. According to Sonic Youth's site, he is planning a 2012 tour. Lee spoke to Rolling Stone about the new album:

And about the future of Sonic Youth:

I'm feeling optimistic about the future no matter what happens at this point. I mean, every band runs its course. We've been together way longer than any of us ever imagined would happen and it's been for the most part an incredibly pleasurable ride. There's still a lot of stuff we're going to continue to do. There's tons and tons of archival projects and things like that that are still going on, so there are so many ways in which we are tied to each other for the future both musically and in other ways. I'm just happy right now to let the future take its course and I guess I'm kind of thankful that I've got this other project that kind of came about on its own. It wasn't kind of like, well, "Oh the band is ending for a while and I've got to figure out what to do." It kind of naturally happened in the course of things so that was a nice way for that to come about. I played my first show the day after Kim and Thurston announced [their separation.] That was completely weird.

A picture of Lee Ranaldo Band from the Yo La Tengo show and setlists below... 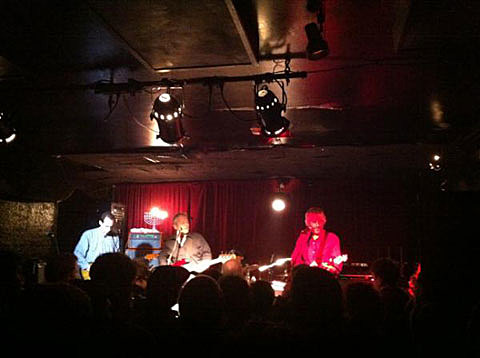