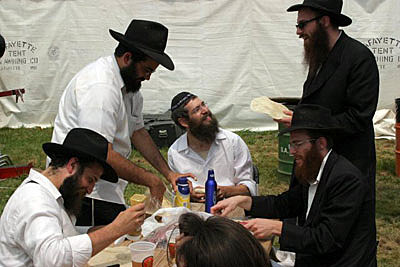 FRIDAY 4PM
"Nobody looks less hippie that Bright Eyes' Conor Oberst. The emo wunderkind's embrace of the proceedings seemed to set the stage for a string of incredible indie-rock performances over the festival. 'I get the impression a lot of you come out every year to check out new music,' he says from the stage. 'I think that's very cool.' And with that, the hipsters and the hippies entered a Yalta-like pact.

Over the course of the set, he brought in a string of guests, including Gillian Welch, Steven Rawlings, My Morning Jacket's Jim James and the Super Furry Animals' Gruff Rhys, to form an indie-rock supergroup for 'Singing a Song in the Morning,' by the Soft Machine's Kevin Ayers. 'They just showed me the song five minutes before and I was like 'OK,' ' Jones told us backstage after the show. You know who else was grooving backstage to the show? You got it: Matisyahu." [Rolling Stone]