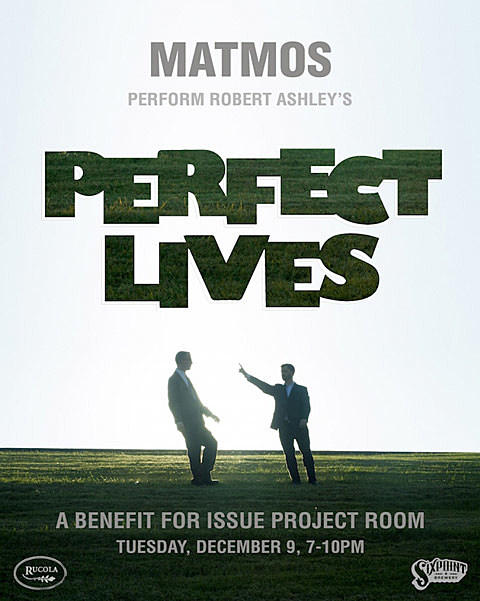 Brooklyn's Issue Project Room will be closing in 2015 for renovations to its Boerum Place theater. One of the final events before it closes will be a special IPR benefit on December 9, featuring electronic duo Matmos performing scenes from Robert Ashley's groundbreaking television opera Perfect Lives which ran from 1978 - 1983. Tickets are available now for IPR members and will go on sale to the general public on Wednesday (10/22). It's Matmos' only show on their schedule. Here's a little bit more about the performance:

Perfect Lives (1978-83) is Robert Ashley's opera "about" bank robbery, cocktail lounges, geriatric love, adolescent elopement, et al, in the American Midwest. One of the definitive text-sound compositions of the late 20th century, it has been called a comic opera about reincarnation. Originally commissioned by the Kitchen in the early 80s, Ashley's Perfect Lives, the opera for television is widely considered the precursor of music-television and a masterpiece of the American vernacular. A Spanish-language adaptation of Perfect Lives, Vidas Perfectas, was commissioned by ISSUE Project Room in 2012 and later staged as part of the 2014 Whitney Biennial.

The Matmos performance even takes place just after the Kim Gordon & Loren Connors show at Issue Project Room on 12/3 with Gary War. Tickets for that show go on sale to the general public on Friday (10/24).