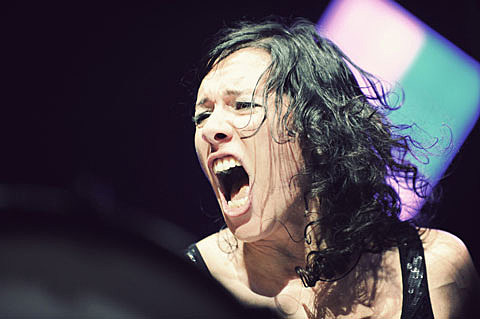 Seething with an unquenchable jealousy due to their future tourmates The Thermals adding THREE shows in their hometown, NYC's Matt & Kim called their agent to enact revenge, and they did it! Matt & Kim will play their own headlining show at Music Hall of Williamsburg on May 25th. Tickets are on Fan Club presale now, AmEx presale begins Wed (5/4) at noon, and regular sale starts Friday (and it will probably sell out much quicker than the Thermals' shows at the Bell House).

So far, no reports have come in of The Thermals reaction to the news at Maxwell's over the weekend (they probably didn't know yet), but maybe it will be a different story when they play the NYU event on Thursday (5/5) at Le Poisson Rouge (advance tickets available for NYU students only).

Matt & Kim go on tour with The Thermals a week after the MHoW show. Lets hope they settle their differences before then or at least before the pair play a sold-out Terminal 5 on June 29th. (Note: I hope you know I'm kidding about their differences.)

Look for Matt & Kim on the Brooklyn Bridge TODAY (5/3) (see above Tweet). All tour dates and some video of what happens when Matt & Kim get angry (their "Cameras" video) is below...