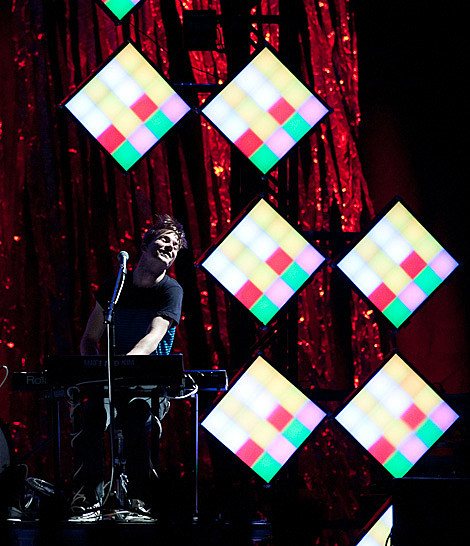 Who would have thought back in 2006 when Matt & Kim were rising through the ranks of the Todd P Brooklyn DIY scene that one day they'd be third on a three-band tour with Blink 182 and My Chemical Romance?

As you may have heard in a commercial playing in the backseat of a cab or elsewhere, Blink 182 are going on the "Honda Civic Tour" with My Chemical Romance. Openers for that tour, which vary by date, include Manchester Orchestra, Rancid, and.... Matt & Kim. Manchester is supporting the first leg of the tour which hits NJ's PNC Bank Arts Center on August 5 and Long Island's Nikon at Jones Beach Theater on August 6 and 7, though Manchester won't open the August 7 show, as they will be at Lollapalooza. A different opener is to be announced. Pre-sale tickets are on sale now, with a general sale starting Saturday (6/11) at 10 AM. Matt & Kim open most of the dates in September and October, as you can see below.

Maybe Best Coast's Bethany Cosentino, who covered "Dammit" (video below), will come out to one of the shows (thinking from her seat during the Brooklyn duo's opening set, "that should be me!"). Mark Hoppus loves Best Coast and also interviewed her boyfriend Wavves.

For now Bethany will have to be satisfied with her contributions to pop punk band New Found Glory. According to the band's website, "Today our friend Bethany from the band Best Coast came into the studio and sang vocals on one of our new songs! We are totally pumped to have her guest on our record."

Best Coast play a Planned Parenthood Benefit w/ Those Darlins at Le Poisson Rouge on June 16, two days after opening the sold out Decemberists show at Prospect Park (6/14). Tickets for the LPR show are still on sale.

Wavves open for Guided by Voices in McCarren Park on June 18th and has other dates scheduled too.