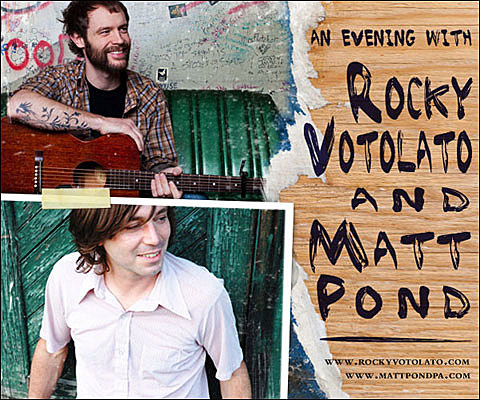 Matt Pond PA and Rocky Votolato are currently on a tour which stops by NYC this Saturday (3/19) at Bowery Ballroom after hitting The Loft in Poughkeepsie, NY a day earlier. Matt Pond told Austinist that he's finishing up the recording of his new EP Spring Fool due out this spring.

"Kenny wrote every song on Two Matchsticks and played every instrument, recorded it in a converted bedroom at home, and mixed at Austin's Resonate Studio with producer Louie Lino (Nada Surf). The album also features special guests Ben Gibbard, members of Ola Podrida, and Wooden Birds touring members Matt Pond and Leslie Sisson, who, in addition to backing vocals, takes a solo turn in a song custom penned by Kenny."

They are currently down at SXSW. All dates and a video below...