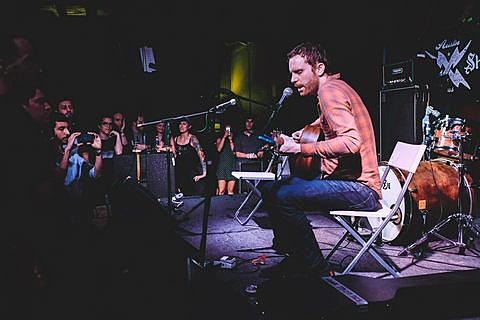 A few emo veterans will be hitting the road together this spring: Get Up Kids frontman Matt Pryor will headline a May run in continuing support of his 2013 solo LP Wrist Slitter, and he'll be supported on the first leg by The Anniversary frontman Josh Berwanger (who also put out a solo LP last year), and on the second leg by Braid frontman Bob Nanna (who we just caught at SXSW). The run with Bob Nanna hits NYC on May 9 at Knitting Factory and NJ the next night at Asbury Lanes (5/10). Tickets for those shows are on sale now. All dates on the tour are also with Spitalfield frontman Mark Rose and Punchline frontman Steve Soboslai aka Blue of Colors. All dates are listed below.

In related news, Braid recently announced that they finished recording their new album, which should be out later this year via Topshelf.

Matt Pryor also plays an Atlantic CIty show (4/12) in April before the tour. All of his dates, with a couple videos, are listed below...

Bob Nanna - "I'd Rather Be Wine Drunk"

all May dates also w/ Mark Rose and Blue of Colors