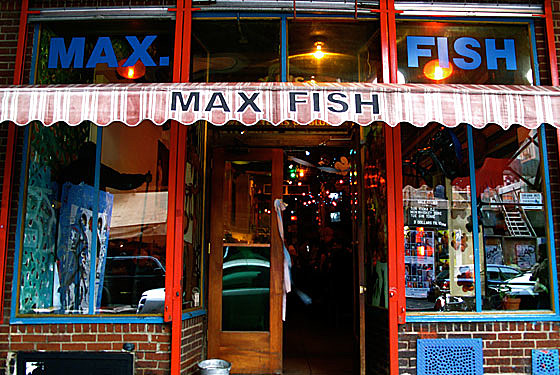 When it opened in 1989, Max Fish was an outpost in a down-and-out neighborhood, but it became a relic in what one former customer called today's "fratified" Lower East Side.

Word of the probable move hit the blogs on Wednesday, though the current bar's death rattle began over two years ago, when the owner, Ulli Rimkus, announced it would close at the end of January 2011, the victim of soaring rent. Hand-wringing and eulogizing quickly ensued, but a last-minute reprieve arrived in the form of an extended lease.

This time, though, the end seems nigh, with Ms. Rimkus confirming in a text message: "We are trying to move to Williamsburg. Nothing certain, except that we have to move." She declined to answer more questions -- or her phone -- and later shooed a reporter out of her bar. - [NY Times]

We've known for a while that longrunning bar Max Fish's days on Ludlow St. have been numbered, but the end is in sight and looks like they'll be moving to Williamsburg. Here's text from their online liquor license petition (via Bowery Boogie):

'We'll Take the Spirit and Everything Else With Us' -Ulli
The Lower East Side institution and cultural icon Max Fish will be moving. We are seeking a 2pm - 4am liquor license for the following address:

If you've enjoyed time at The Fish please sign and share this petition. And if you live or know anyone that lives within 500 Feet of either 132 Metropolitan Ave or 99 North 1st St in Brooklyn, please contact me directly at: tmq777@gmail.com.

Thanks for your support.

I hope "everything else" includes that melty Julio Iglesias picture that used to fascinate me in the early '00s. The address puts the new location right beside Nitehawk Cinema, and with the country-themed Skinny Dennis on the corner of Berry it's becoming a hot block.