Cavalera Conspiracy at Irving Plaza in 2008 (more by Lori Bally) 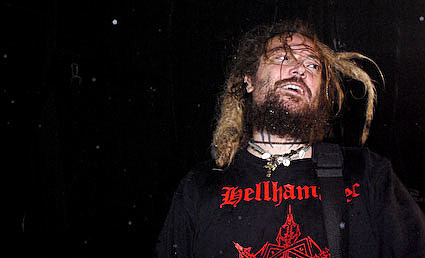 Sepultura's Cavalera bros, guitarist Max and drummer Igor, have been talked into forming a "metal version of the White Stripes" by none other than James Murphy of DFA Records and LCD Soundsystem. In an interview with the Guardian, Igor told the British paper that Murphy suggested that Igor and Max, who perform together in the Cavalera Conspiracy, launch that band as a two-piece instead of a quartet. Murphy further insisted that the brothers record and perform as a duet, much like the White Stripes, and promised that any record they record would be "the heaviest record of [their] careers."

Of course, this relationship didn't just come out of nowhere. Igor Cavalera and his wife, Laima Leyton, perform and DJ as an electro outfit called MixHell, a project that put Igor into the same world as Murphy. As Igor told DJ Mag once:

"We are proud to have gained the support of the electro scene, but most of all, we are glad to have them as special friends in our lives," Iggor tells DJ Mag. "James Murphy, Erol, Soulwax, Boys Noize, DJ Hell, Justice and others -- besides being supporters -- are part of our family today, and this strong relation we've built is priceless.""

More on this developing news at the Guardian

Max and Igor's old band, Sepultura, recently announced a new LP and a tour that hits NYC at Gramercy Theater on November 18. Tickets for that show are still available.