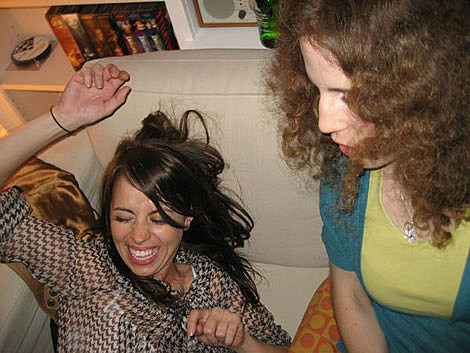 1. On Wednesday night Gabe Liedman, Jenny Slate [SNL] and I [Max Silvestri] have an especially spectacular Big Terrific for you all. It's almost too famous? We've got some special Halloween shenanigans planned (poisoned candy, knives, etc) as well as comedy appearances from Aziz Ansari (Parks and Recreation, Funny People), Natasha Leggero (Tonight Show), Joe Mande (Best Week Ever), John Mulaney (Conan O'Brien, writer for Saturday Night Live), Andrea Rosen (Stella, Flight of the Conchords) and Reggie Watts (Late Night with Jimmy Fallon). Are you kidding me? That is so crazy fun. Be there at 8pm at Cameo Gallery, located at 93 North 6th Street between Berry & Wythe in Williamsburg. It's free. The after-party will be something special too.

2. What is funnier or more rocking than a museum? Literally nothing. I am very proud to be emceeing It Came From Brooklyn at the Guggenheim on Friday night

That Cameo lineup is giving the UCB show (which also starts at 8:00 and has many of the same comedians performing) a run for its money!