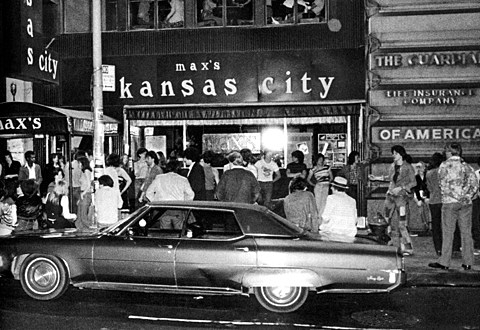 Earlier this year, we mentioned that the legendary now-closed NYC punk venue Max's Kansas City would be celebrating its 50th anniversary from June 4-7 at Bowery Electric, the current home of many '70s-era NYC punks. Now the lineups have been announced.

Night 2 has The Waldos, Testors (the original lineup featuring Sonny Vincent), New York Junk, Luigi & the Wiseguys and Love Pirates, with Bill Popp & the Tapes playing in the Map Room. MC Jimi Lalumia's role is reprised, this time with DJ Rob Select, and there will be cameos by Steve Dior and Tammy Faye Starlight reprising her acclaimed off-broadway performance as Nico.

And finally, night 4 has Nelson Slater, Prima Donna, The Rattlers, 4 on the Floor, Deborah Front, Hipp Pipps, The Flashcubs, MC Jimi Lalumia, DJ Twig the Wonder Kid, and a cameo by Penny Arcade

All four nights will be hosted by Peter Crowley. Tickets for all four shows, and a four-night pass, are on sale now.