Jayne County and the Electric Chairs (not a recent pic) 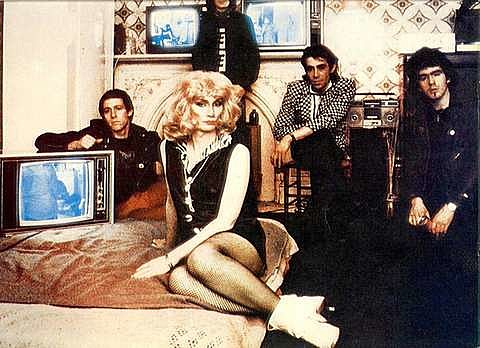 Looks like CBGB isn't the only legendary NYC punk venue celebrating a "reunion" this year. Max's Kansas City will be throwing an alumni reunion for four days in June at The Bowery Electric from June 7-10. Max's existed just above Union Square on Park Ave. South from 1965-1974 and again from 1975-1981. It was during its second run as a venue that it became known, along with CBGB, as one of the birthplaces of punk in NYC, having played host to Ramones, Blondie, Television, Talking Heads, New York Dolls, Patti Smith, Suicide, and many others.

The alumni reunion at Bowery Electric will include proto-punk legends Jayne County and the Electric Chairs (formerly Wayne County and the Electric Chairs, Jayne changed her name after the band's breakup and began identifying as a woman), who are best known for their single, "Fuck Off," and their excellent cover of the Electric Prunes' "I Had Too Much to Dream Last Night." They play on June 7 with The Rattlers, Sea Monster, Ruby & the Rednecks, and NY Junk. Tickets for that show are on sale now.

On June 8, we'll get Billy Rath's Street Pirates (Billy played bass with Johnny Thunders and the Heartbreakers), The Sic F*cks, Avant Duel, power pop greats The Shirts (who have been reunited since 2003 with founding members Robert Racioppo and Artie Lamonica, but without lead singer Annie Golden), and The Brats. Tickets for that show are on sale now.

On June 9, it's The Nihilistics, The Waldos (featuring Walter Lure of Johnny Thunders' band), The Planets, and Stumblebunny (tickets) and finally on June 10, it's King Bee & the Stingers, The Rousers, The Deer France & Dee Pop Experience, The Bowerytones, Four on the Floor, Street Corner Review, Hudson Dusters, and Honey Davis (tickets). A four day pass, which gains you access to all four shows, is also available.

Speaking of proto-punk shows at the Bowery Electric, Deniz Tek (of Australia's Radio Birdman) is currently on a tour of the US and Europe which brings him to Bowery Electric TONIGHT (5/18), Maxwell's on Saturday (5/19) in Hoboken, NJ and a Philly show on Sunday (5/20). The Master Plan open all three of those shows and Daddy Long Legs are on the Bowery Electric and Philly show. Tickets for tonight's Bowery Electric show and Saturday's Maxwell's show are available. All Deniz Tez dates are listed below.

Now that we're talking about Maxwell's, it's worth mentioning that another NYC punk legend will be there this month when Manitoba plays on May 25. In addition to being the reason that Dan Snaith started using the Caribou moniker, Manitoba is also the current project of Handsome Dick Manitoba, lead singer of The Dictators (who recorded a punk cover of "California Sun" two years before the Ramones did, and had a handful of solid originals as well). Manitoba also includes fellow Dictators Ross the Boss and JP Patternson, Daniel Rey (who's produced records for late-period Ramones, Richard Hell, Misfits), and Dean Rispler. Tickets for the Maxwell's show are on sale now. Manitoba also opens for Dick Dale on a Rocks Off Concert Cruise on 7/22 with The Detroit Cobras (tickets).

Lastly, speaking of CBGB, in addition to this summer's CBGB festival, The Telegraph points out that a CBGB biopic is also in the works which will profile the history of the club and how it became a breeding ground for the thriving late '70s punk scene. The film will star Alan Rickman (aka Severus Snape aka Hans Gruber) as CBGB founder Hilly Kristal, directed by Randall Miller (who worked with Rickman on Bottle Shock) and co-produced by Hilly's daughter, Lisa.

A list of all Deniz Tek dates and some videos are below...