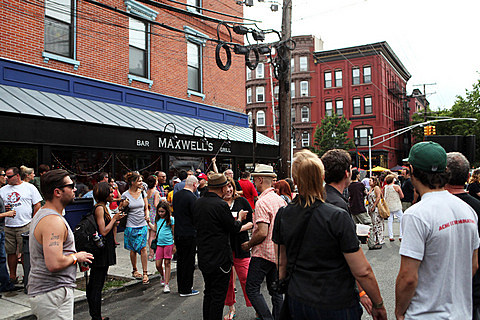 Six months after the iconic Hoboken rock club and restaurant commemorated its "closing" with a gala block party and concert, the business has finally been sold. Word spread quickly on social media and Maxwell's found itself packed with familiar faces on Sunday, the last night in its current incarnation, for a final, farewell wake.

The new owners will retain the name Maxwell's but reconfigure the space to be a family restaurant specializing in thin-crust artisanal pizza.

"It's not a wake to me, it's a joyous celebration," said Dave Post, who with his wife Jackie decided to renew the lease and took over the restaurant after co-owner and booker Todd Abramson bowed out last July. - [NJ.com]

Maxwell's has been operating as a bar and restaurant pretty much since it closed as a music club, and Sunday had their last night in the space with a party featuring Tom Vincent and "Tommy's Talent Show," a "freeflowing hootenanny of Hoboken musicans," in the front room, and a band of Maxwell's employees playing in the back.

That back room of the new version of Maxwell's will become a dining room, though the new owners are not ruling out some music. New Maxwell's co-owner Evan Dean told NJ.com, "Obviously it won't be a rock club anymore but we'll definitely be open to the idea of having live entertainment."