inside of Maxwell's (more by PSquared Photography) 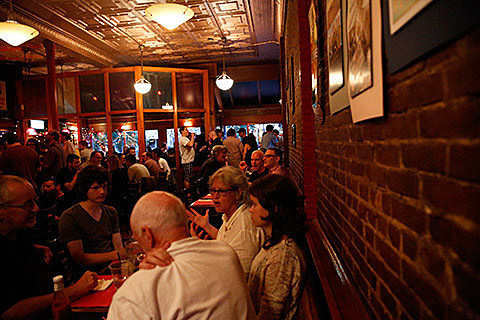 We thought it was the end of Hoboken club Maxwell's for good after the venue held two final shows and a farewell block party on July 31, but then were thrown for a curveball when Justin Timberlake performed at the venue to film a Target commercial. It seemed for a minute like JT would then be Maxwell's final memory, but now NJ.com is reporting that the venue will temporarily reopen as a bar and restaurant:

According to co-owner Dave Post, Maxwell's will reopen as a bar and restaurant only -- and will remain open until a buyer for the club is found. Post isn't sure when Maxwell's will begin serving food again, but it will likely happen in the next few days.

"Hopefully, it won't take too long to make a sale," says Post, who has played the club many times with Swingadelic, his energetic, imaginative jazz and blues band. "But even if I sold Maxwell's tomorrow, it would take 90 days for the license to transfer."

While the return of the restaurant is good news for the hungry and thirsty in Hoboken, those about to rock will have to look elsewhere. Although Maxwell's still has the capacity to host live music -- as Justin Timberlake proved -- Post has no plans to book bands into the space. Todd Abramson, the co-owner whose bookings gave Maxwell's much of its character, is not involved in the reopening.