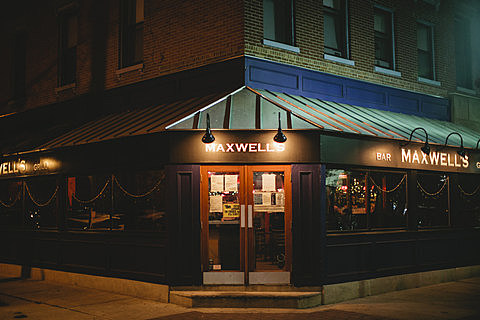 Hoboken venue Maxwell's closed as a music club in 2013 only to be sold and re-opened as a bar/restaurant earlier this year. When we last posted, we mentioned the new owners aren't ruling out live music, and now Jim Testa at The Star Ledger (via NJ.com) reports that there will in fact be live music. It's a little different than the stuff Maxwell's used to have though:

"We definitely want to have music back in Hoboken," said [new co-owner Pete] Carr. "We're trying to engage the local community and offer a stage for the town's local indie bands to play." And with an initial spate of concerts that includes veteran NJ cover band the Nerds next Thursday, an Eric Clapton tribute band on Nov. 7, and DJ nights on Halloween weekend, Carr and [Evan] Dean seem enthusiastic about making original live music a staple at the venue again.

...Dean and Carr then reached out to some of the people driving Hoboken's current music, including musician and promoter Dave Entwistle, restauranteur and blogger Stephen Bailey, and producer/musician Chris Gibson. Because Entwistle and Bailey have been responsible for the Hoboken Music Awards since their inception, they'll be using their new role as curators for Maxwell's Tavern's back room to do a monthly HMA Indie Night and bring the best local bands to the venue's back room.

"I don't care what the naysayers say about this not being the old Maxwell's," said Bailey.

"This is a chance to start a brand new venue, and create a whole new Hoboken scene."

...The new team will launch their first Hoboken Music Awards Indie Night on Friday, Dec. 5. "We have a really good feeling about this," said Entwistle. "The first Friday of every month will be locals night. If you play a HMA Night at Maxwell's, you'll be eligible for the next year's awards." It's a fresh approach, and we'll have a new logo, new ideas, new music," he said.

The venue's first concert is tonight (10/24) with American Idol singer Elise Testone. More info on other upcoming events and tickets at the Maxwell's website.

Ex-Maxwell's booker Todd Abramson can now be found at the Bell House in Brooklyn.