I tried to copy Maya's fluid voice early on but failed miserably. But because of her I found my own... RIP Maya Angelou and thank u - @QtipTheAbstract

And we have lost our wisest woman - the maker of the most beautiful words. I couldn't love you more Dr. Maya. Thank you. Fly free. - Kimya Dawson (@mrskimyadawson)

Momentarily took the air out of me hearing you passed over. Then I smiled for you. REST IN GLORY MAYA ANGELOU. Luv! - @Nas

"I was thinking about her lately. GOD Bless the Soul of one if my heroes. Dr Maya Angelou" - @Common

"i was very fortunate to meet and have dinner with maya angelou some years back in nyc. what a remarkable woman we've lost." ― @Moby 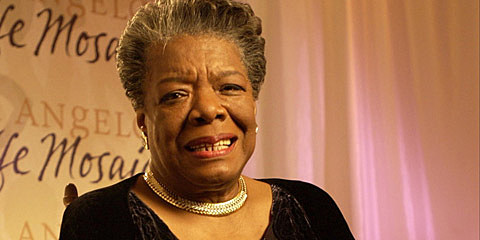 Maya Angelou, the memoirist and poet whose landmark book of 1969, "I Know Why the Caged Bird Sings" -- which describes in lyrical, unsparing prose her childhood in the Jim Crow South -- was among the first autobiographies by a 20th-century black woman to reach a wide general readership, died on Wednesday in her home. She was 86 and lived in Winston-Salem, N.C.

Her death was confirmed by her longtime literary agent, Helen Brann. No immediate cause had been determined, but Ms. Brann said Ms. Angelou had been in frail health for some time and had had heart problems.

As well known as she was for her memoirs, which eventually filled six volumes, Ms. Angelou very likely received her widest exposure on a chilly January day in 1993, when she delivered the inaugural poem, "On the Pulse of Morning," at the swearing-in of Bill Clinton, the nation's 42nd president, who, like Ms. Angelou, had grown up poor in rural Arkansas. - [NY Times]

We lost one of America's most distintive voices today. Rest in peace, Maya Angelou. Your words live on.

Watch her read "On the Pulse of Morning" at Clinton's inauguration and read President Obama's tribute to her, below...

Maya Angelou's Poem "On the Pulse of Morning" at 93 inauguration

When her friend Nelson Mandela passed away last year, Maya Angelou wrote that "No sun outlasts its sunset, but will rise again, and bring the dawn."

Today, Michelle and I join millions around the world in remembering one of the brightest lights of our time - a brilliant writer, a fierce friend, and a truly phenomenal woman. Over the course of her remarkable life, Maya was many things - an author, poet, civil rights activist, playwright, actress, director, composer, singer and dancer. But above all, she was a storyteller - and her greatest stories were true. A childhood of suffering and abuse actually drove her to stop speaking - but the voice she found helped generations of Americans find their rainbow amidst the clouds, and inspired the rest of us to be our best selves. In fact, she inspired my own mother to name my sister Maya.

Like so many others, Michelle and I will always cherish the time we were privileged to spend with Maya. With a kind word and a strong embrace, she had the ability to remind us that we are all God's children; that we all have something to offer. And while Maya's day may be done, we take comfort in knowing that her song will continue, "flung up to heaven" - and we celebrate the dawn that Maya Angelou helped bring.