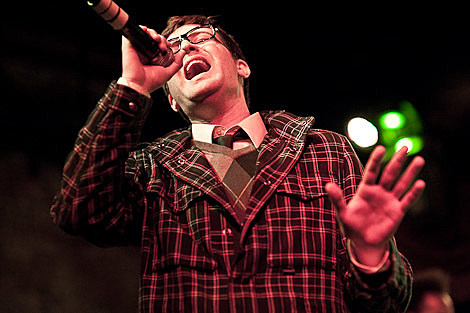 The "retro" tag is added to almost any contemporary work that sounds like it was originally recorded between 1966 and 1974, and Mayer Hawthorne, among the newest contributors to the genre, is aware of how trends come and go. After being introduced to Stones Throw label head Peanut Butter Wolf by mutual friend Noelle Scaggs of the Rebirth, even his current boss was skeptical. "He showed me two songs and I didn't understand what I was listening to," Wolf recalls. "I asked him if they were old songs that he did re-edits of - I couldn't believe they were new songs and that he played all the instruments." [Stones Throw]

Soul singer Mayer Hawthorne will team up with Passion Pit for shows from March 28th to April 15th (but no NYC date). But before that, Hawthorne is going on his own headlining tour with his band The County and singer Nikki Jean. The trip includes SXSW and a March 4th show at Webster Hall. Tickets are on AmEx presale now and go on general sale Friday at noon.

Friday at noon is also when Passion Pit's next NYC show goes on sale. They're playing Prospect Park with Tokyo Police Club this summer.

And like PP & TPC, Mayer will also be at Coachella in April. His label recently followed Mayer to the record store. That clip, music videos and all tour dates are below...