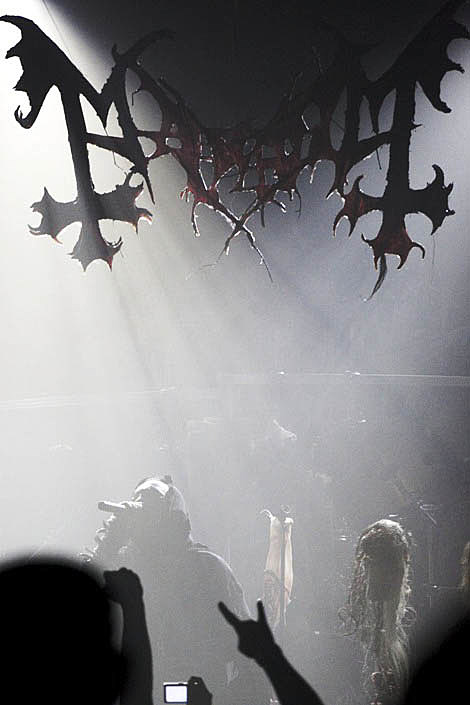 After cancelling their last batch of dates, Mayhem will head back out to North America for a fall tour with support from Keep Of Kalessin, Hate, and Abigail Williams. Woe will also join on thirteen dates, though no word on which ones. The tour hits NYC at Gramercy Theater on November 3rd. Tickets info is forthcoming. Full tour schedule is below.

To the point, then: we get it, dude. You think you are very, very important. Everything about you oozes a sense of superiority. Looking at only the first few pages of your Transcendental Black Metal essay, we find the following:

You somehow decided that black metal is the "culmination of the history of extreme metal."

You explain that traditional black metal is ultimately unfulfilling: "Hyperborean [traditional, Scandinavian-derived] Black Metal represents the mountaineer's arrival at the peak and a supposed leap off of it... And he is left, crestfallen, frozen and alone, in the Hyperborean realm."

You authoritatively claim the blast beat as belonging to black metal, though far from unique to it, because it allows you to rationalize your I-can't-maintain-a-hyper-blast beat by plainly stating, "the technique of Hyperborean Black Metal is the blast beat."

You audaciously inform us that your work is the next stage of the art's evolution with "[Transcendental Black Metal] is a sublimination of Hyperborean Black Metal in both its spiritual aspect and its technical aspect."

Those passages, the essay on the whole, and every attempt to defend your position shows that you lack even the smallest sliver of modesty or respect for your peers or listeners. These qualities -- rather, the lack of these qualities -- are not unusual for black metal artists to possess; after all, concepts of superiority and elitism are hallmarks of traditional black metal. In your case, though, they do not apply because you have gone so far out of your way to show that you are not the typical black metal musician, you are not part of this world -- you are an outsider wearing some (just some) of black metal's skin. I appreciate you taking the effort to describe what you are attempting to do; however, when you make lengthy, authoritative statements decrying black metal as dead and outdated, when you deride everything that came before you as little more than a failed attempt at something that is unreachable, you're thumbing your nose at everyone who does not see things your way. It's obnoxious. It's rude. It's annoying.

Check out the whole thing at Metal Review. All tour dates and some video is below.