The scene outside of Tammany Hall 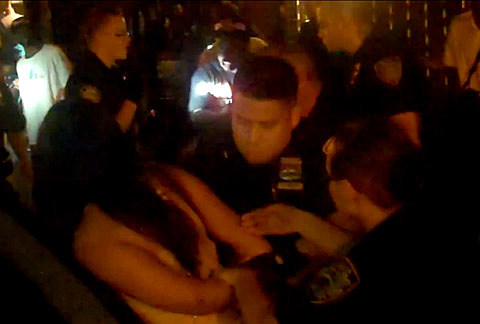 June 28th was reportedly a "peaceful, fun classic hip hop party" featuring Smif n Wessun and Pete Rock who were celebrating the release of their collaborative LP Monumental. That is, until a near riot broke out otside of LES venue Tammany Hall that led to arrests, violence, five injured officers and calls of police brutality.

...We all left the venue to be greeted outside by a sea of NYPD gloved up and very aggressive. As we began to move we all witnessed the most brutal beating of a party patron. He was on the floor surrounded by 10 police officers with sticks out beating him. In shock, we must have not moved quickly enough to the officers liking and they shouted "Move the FUCK back" and then shoved myself and my daughter down to the ground. Now we were surrounded by 3 cops and 1 pinning us down. My daughter shouted "Get off my mother" and was handcuffed and arrested... Tonight with a lump in my throat my daughter remains in police custody with 4 others. She has been charged with assaulting a police officer, resisting arrest and disorderly conduct.

Here's the official statement from Duck Down Records:

"It was a peaceful gathering inside of a sold-out Tammany Hall (lower-east side Manhattan, NY) to see the group perform new music from the project. Earlier in the evening some guest wanted to enter the event but were turned away by the management and bouncers employed by the club. A minor argument ensued but eventually was diffused by the bouncers. Thirty minutes after that minor skirmish (no 61 or incident was ever filed by the club or bouncers) some 15-20 uniformed Police Officers from the 7th precinct arrived at the venue. When the officers arrived some of them entered the venue where they witnessed a peaceful environment, they quickly exited the venue and joined their fellow officers in the exit area of the venue.

Upon joining their fellow Officer's they all began to put on black leather gloves. At that time more uniformed officers arrived in marked rmp's and exited their vehicles. The officers then hurried into the club and began macing and assaulting individuals inside the club, dragging one of them out and pummeling him directly in front of the club. Present at the event were artist, industry tastemakers, fans, photographers, and cameramen. Several people began filming and recording the unprovoked brutality much to the dismay of the police. The officers then began to mace and assault anyone within arms length, including several women. Their behavior was unjustified, unprovoked, and simply barbaric considering there was no provocation. Pete Rock, Tek and Steele fortunately were not harmed, however some of their friends & family were assaulted by the Police.

The statement also says that "today at 12PM EST, Pete Rock & Tek & Steele of Smif N Wessun will be holding a press conference to address all questions at New York Criminal Court on 100 Centre Street, New York, NY." Shara McHayle's statement mentioned "a peaceful protest tomorrow morning 9am" at the same location (I assume it was sent out last night). Video from outside of the show is below.

--
Inside the Club at Tammany Hall