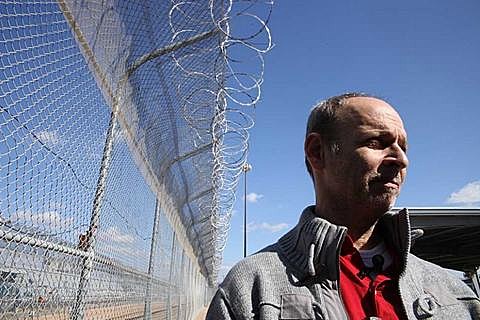 Wayne Kramer and his wife Margaret are "The Beast and the Angel," a short film from Adam McKay and Shira Piven that appears as the third segment in "Lifecasters." Kramer is best known as former lead guitarist for 1960s Detroit-based revolutionary punk rock prototypes MC5....

In Kramer's story, we see him through archival footage leading MC5 in an incendiary version of their signature song "Kick Out The Jams" juxtaposed with new footage detailing his eventual spiral into drug addiction and subsequent incarceration for selling cocaine. "Wayne hit rock bottom and then found new ways to go even lower," Gaudet says. "To see where he is now, it's amazing how he reinvented himself."

Clean and sober since 1999, much of Kramer's energy these days is directed toward going back to jail - this time with a truck full of guitars. He is one of the co-founders of Jail Guitar Doors, a non-profit organization dedicated to providing musical instruments to help rehabilitate prisoners and introduce them to a second act in life through music. - [The Main Edge]

New PBS series Lifecasters debuts tomorrow on affiliates around the country and you can watch the show at PBS.org too. Tonight at the Walter Reade Theatre at Lincoln Center there's a premiere event hosted by Jeremy Piven -- his older sister Shira codirected the Kramer segment with her husband Adam McKay (who directed Anchorman among other things) -- and feature a live set from Wayne Kramer. Tickets ($10) are still available.

Meanwhile, the MC5 guitarist will perform on Thursday (2/7) at Bowery Electric and it's his first solo NYC show in 10 years (not counting the Lifecasters event). He'll be performing with a full band. Tickets are still available and and show also has Threats, Faith, and Romans on the bill.

Flyer for the Bowery Electric show and Lifecasters trailer are below...

Lifecasters: Wayne Kramer (MC5) on Bringing Change in His Life 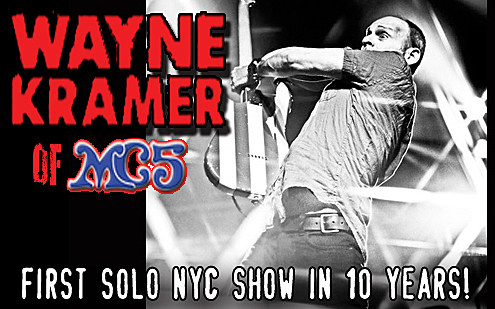