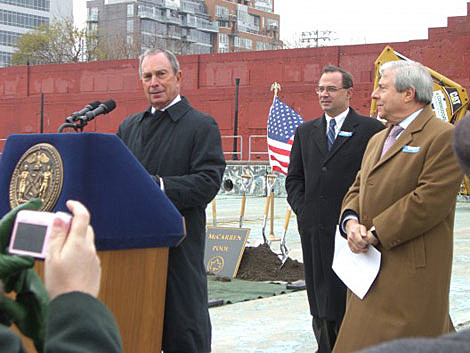 [Monday] in the Williamsburg/Greenpoint buffer zone, Mayor Bloomberg & friends gathered to break ground--or should we say threw some finely placed dirt on astroturf--on the long-awaited McCarren Park Pool renovation. He may have referred to it as McLaren Park for the first three quarters of his speech, but Bloomburg still managed to build excitement for the $50 million project to get off the ground despite a rough spot for funding public projects in the city. Originally constructed under Fiorello LaGuardia in 1936 as a WPA project, the Pool fell under disarray by 1984 and closed until being converted into the world's most fashion-forward music venue a few years back. [Curbed]

That fashion-forward music venue moved to the Williamsburg Waterfront last summer, and (it seems) will return to the new spot this summer as well.