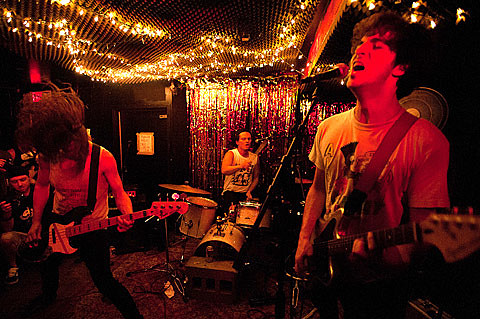 Fat Wreck Chords turned 25 this year and they've been on a roll with signing cool new bands lately. This month they put out the great new album from Night Birds (who were added to Negative Approach's tour) and today they announced the signing of Portland garage punks Mean Jeans. They're planning a 2016 release for the followup to 2012's On Mars.

Here's what drummer/vocalist Andrew Caddick aka Jeans Wilder (who also plays with Nathan from Wavves in Spirit Club) said about the signing:

The very first show I ever went to was in 96 in Vienna, Austria to see NOFX, Weezer, and Lagwagon. I remember purchasing a Lagwagon ringer tee and putting it on immediately, because wearing a shirt of the band you are seeing is the cool thing to do. Especially since I hadn't even heard Lagwagon before. A year later I bumped into Chris Flippin outside of a show at that same venue and he brought me and my friends on the Lagwagon tour bus. We talked about how Blink-182 had dropped off the tour because they had to film the video for Dammit and about how the new album Double Plaidinum was somewhat of a departure from Hoss. Later that year I shit my pants* on the way home from a Good Riddance show. Many many years later I acquired Tré Cool's cell phone number and tried to trade it to someone for Fat Mike's cell phone number. I was denied. Needless to say, myself and the Mean Jeans are very excited to be joining the FAT family. It is 5:30am on our way to FEST so excuse the boring story, it's the best we got at this time of day.

* I had borrowed my friend's pants that day so I guess technically I shit HIS pants...

As he points out, the band are on their way to The Fest, which they'll play on Sunday (11/1) at Cowboys with the reunited Weston, Toys That Kill and more.

After Fest their tour heads north and hits NYC on November 7 at Cake Shop with Paul Collins Beat and Nancy (great bill) and November 8 at Good Room with The Jeanies, Nuclear Santa Claust and Citizen Blast Kane. Tickets for Cake Shop and Good Room are on sale now.

All dates are listed, with a stream of On Mars, below...