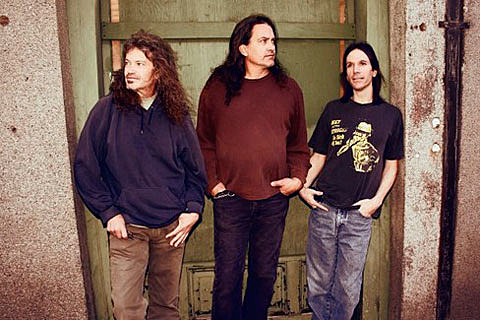 Meat Puppets recently finished up a tour in support of their most recent LP Lollipop which came out this past April. After a couple dates with Soundgarden at the end of the month, the Meat Puppets will take a short break before playing a few more dates this fall. Their last string of dates never came through NYC, but this one will on November 4 at Le Poisson Rouge. Tickets are on sale now. All tour dates are listed below.

Meat Puppet Curt Kirkwood recently spoke to JSOnline about their tour and Nirvana, who they played with at Nirvana's MTV Unplugged performance, and whose seminal album Nevermind celebrates its 20th anniversary this year. The Meat Puppets recorded a cover of "Smells Like Teen Spirit" for Spin's new Nevermind tribute album, Newermind. The album also features contributions by EMA (who has shows coming up soon), The Vaselines, JEFF the Brotherhood, Amanda Palmer, Titus Andronicus, Surfer Blood and others. The album will be available for free download on Spin's website starting July 26. Tracklist below.

In honor of the 20th anniversary of Nevermind, Universal is also releasing a deluxe edition of the album on September 19. The reissue includes a 4 CD/1 DVD boxset with rarities, B-sides, unreleased recordings, BBC radio appearances, and an unreleased concert on DVD.

Universal will also reissue 1991: The Year Punk Broke on DVD on September 6. The film documents a Sonic Youth tour with Nirvana, Dinosaur Jr., Ramones, Babes in Toyland, and Gumball. The reissue includes a bonus film titled (This Is Known As) The Blues Scale, which features live footage of Sonic Youth and Nirvana.

Meat Puppets dates and video of them with Nirvana at MTV Unplugged in 1993, below...