still from "It's Not Enough" video 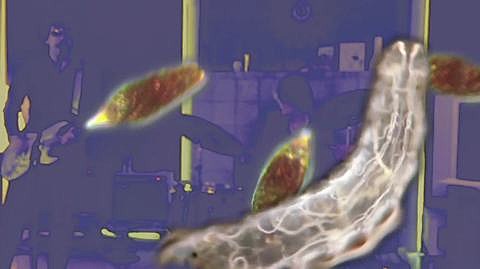 In the UK, bands such as TOY and the Horrors are reproducing shoe-gaze sounds pioneered by yourself, MBV and Ride amongst others. Do you feel you fit nicely into this landscape now as they've made it credible again?
I honestly have no earthly idea. It would be absurd for us to attempt to fit in anywhere though. We made this record for ourselves mainly and with no regard for any type of success other than of the personal variety.

Was there a shoegaze scene in the US in the early 90s? How did you fit in with the grunge and alt-rock explosion?
There was not much of a scene at all. Only a handful of unrelated bands in far-flung regions. We benefited from the alt-rock explosion in that it was easy to get a major record deal by playing noisy guitar pop in 1991 but it was really just a ruse so we could make big budget weirdo art records. It was a good ride while it lasted.

You were signed to Creation in the UK in the early 90s. What was it like working alongside Alan McGee at that time, who was otherwise trying to push something eccentrically British - in spite of the "American sound"?
It was great getting to raid the promo closet at the Creation office for vinyl. That was probably the best part of working with him - getting the first Moonshake 12 inch for free.   - [The Glass Magazine]

Medicine's first full-band album in 18 years, To the Happy Few, is out today (8/5) via Captured Tracks. Beautiful, noisy and full of sonic left turns, Brad Laner and the rest of the group pick up right where they left off. You can stream the whole thing on Spotify and Rdio, and we've got the premiere of the video for LP standout "It's Not Enough," which you can watch below..

As mentioned, Medicine will play a NYC release show at Music Hall of Williamsburg on August 16 with openers Weekend and Leverage Models, making for a very solid show. Tickets are still available, but if you'd like to go for free we're giving away a pair. Details below.

Medicine //"It's Not Enough"

======================
For a chance at winning a pair of tickets to see MEDICINE AT MUSIC HALL OF WILLIAMSBURG: either tweet something that includes both @BrooklynVegan AND "MEDICINE" in the tweet, or send an email to BVCONTESTS@HOTMAIL.COM with the subject line "MEDICINE". Include your first and last name in the email. We'll pick a winner at random and contact them with more details. If you enter by email, it will not be shared with anyone else. Good luck!
======================