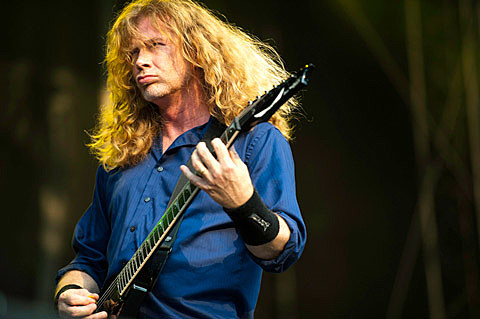 Coming off of their recent appearance at "The Big Four" Megadeth have announced the latest iteration of Gigantour and this time they've roped in the great Motorhead in addition to appearances from Volbeat and Lacuna Coil for the North American trek. The dates kick off in late January in Camden, NJ, eventually making its way up to Theater at Madison Square Garden on 1/28. Ticketing and VIP package deals for the Theater at MSG are forthcoming. All dates are listed below.

Megadeth welcomed their thirteenth LP TH1RT3EN (get it?) TODAY (11/1) via Roadrunner Records. TH1RT3EN is the follow-up to 2009's Endgame, and features "Public Enemy No. 1" which the band performed last night (10/31) on Jimmy Kimmel... in full costume! Video of that, alongside all dates and additional video is below...