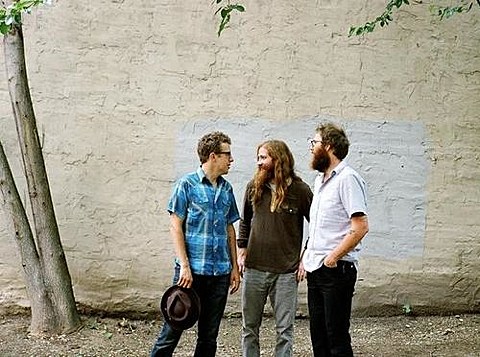 We recently mentioned that Megafaun were on a short tour which wraps up in NYC TONIGHT (5/2) at Baby's All Right (tickets) and that SPECIAL GUESTS are promised. We still don't know for sure who the guests at tonight's show will be, but we do know that Bon Iver's Justin Vernon joined them at both of their Durham, NC shows this week, and at the second one The Mountain Goats' John Darnielle and Hiss Golden Messenger's Mike Taylor joined them as well.

On night 2, Justin sang on a cover of Johnny Cash's "Unchained," and then he played guitar as John Darnielle sang on a cover of The Grateful Dead's "Friend of the Devil." (As you may remember, Megafaun and Justin Vernon are both contributing to The National's Grateful Dead tribute album.) Hiss Golden Messenger did a HGM song, "Mahagony Dread," which will appear on his new album for Merge.

Watch videos of those 3 songs via Indy Week (via Pitchfork), below...