Megafaun at Ecstatic Music Fest in 2013 (more by David Andrako) 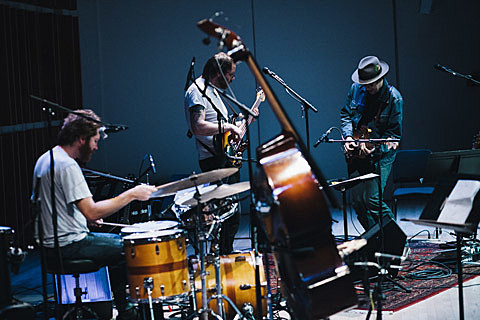 Megafaun kicked off their short tour in their hometown of Durham, NC last night (4/29) and it continues with another show there tonight (4/30) before hitting DC and finally wrapping up in NYC on Friday (5/2) at Baby's All Right. Opening the DC and NYC shows is, as Megafaun puts it, "a chance to see the legendary Grandma Sparrow," otherwise known as the solo project of Megafaun drummer Joe Westerlund. The band also mentioned earlier this month on Twitter, "This will be it again for a while on the 'ol Faun front. Anticipate some special guests and a very good time. We are real excited!" Baby's All Right mentioned the guests on Facebook too, saying "Friday will be a very special night with some very special guests. Please take our word for it and be here. You won't regret it." Keep in mind that Megafaun's list of past collaborators and friends is long and impressive. Before Megafaun they had a pre-Bon Iver band with Justin Vernon called DeYarmond Edison. Tickets for Friday's show are still available.

In related news, Megafaun members are some of the many people contributing to The National's forthcoming Grateful Dead tribute album. Phil Cook spoke to Jambands.com back in October:

We are also going to record with Justin [Vernon] and [The National's Aaron and Bryce Dessner] on their Grateful Dead tribute. We are going to record out stuff at Justin's studio which is going to be a trip.

I know the members of Megafaun have deep roots in the Phish world, but were the Grateful Dead an influence on you as well?

Not as much growing up but it has been a more recent thing. My dad was a big Deadhead and he'd take us all to Phish shows to kind of see where the scene was going. So I got into them through him but Phish was one of the bands that my brother and I grew up listening to at jazz camp. Growing up in a kind of removed area, camp and that music opened up our eyes to so many things.

The tribute will also feature members of Bon Iver, The War on Drugs, The Walkmen, Kurt Vile, Vampire Weekend and more. The National's Matt Berninger also gave an update on the project not long ago to Billboard:

Speaking of the Grateful Dead project, is the National doing a song for that?

MB: Yes. And there's a huge debate over which one to do. They keep talking about "Box of Rain" for me. Something because of the register of the vocals. I'm staying out of it. It's [bassist Scott Devendorf and drummer Bryan Devendorf] that are probably the biggest Dead fans. There's constant emails going back and forth about what to do. They kind of kicked me out of the whole Dead project because I kinda don't know what I'm talking about. I've never followed the Dead much but those guys have become ... they're borderline experts on the Dead. It's a fun thing. Meeting Bob Weir and playing with him in San Francisco was surreal and awesome. I can't wait until that thing finally comes together.

Do you think the surviving members like Bob Weir and Phil Lesh would play on it?
MB: I think so. I don't know. That's a good question. I don't want to say "yes" but certainly Bob Weir ... we've done a couple things with him already and he's the nicest guy. All the surviving members are totally supportive of the project. They sent everybody box sets that we could pass around. They just opened up their entire catalog to us. They've been 100% behind it. I'm not sure who's signed up.

In other Megafaun news, related band Sylvan Esso just released a new video and announced they'll be playing a Governors Ball pre-party in NYC before their tour with tUnE-yArDs.

Updated Megafaun dates are listed, with videos (including one of Sharon Van Etten fronting Megafaun), below...