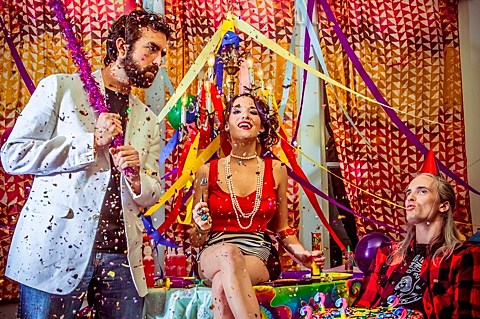 Austin's Megafauna are not to be confused with Justin Vernon's indie folk pals Megafaun; the similarly named bands are similar in just about zero other ways. Megafauna have a new album called Maximalist coming out next week (4/15) via Danimal Kingdom, and that's just about the perfect title for this band's brand of rock. They pull from '90s alternative and '70s hard rock for a blend that's really just big. It was mixed by Tim Palmer, who's worked with Pearl Jam, The Cure, U2 and David Bowie, so as you can imagine he gets them the sound they're going for. That being said, it's not overproduced stadium rock either. Just big, fun guitar music made by people who aren't afraid to let loose and indulge in their big, fun guitar pleasures. You can pre-order the album now, and check out the full stream which premieres in this post.

Megafauna also have a ton of dates coming up following the album's release through late June. The tour brings them to NYC for a show on May 1 at Knitting Factory with Lip Talk. Tickets for that show are on sale now.

All dates are listed, with the new album stream, below...