Brian Gibson and Jason Kendall of Megasus at Acheron (more) 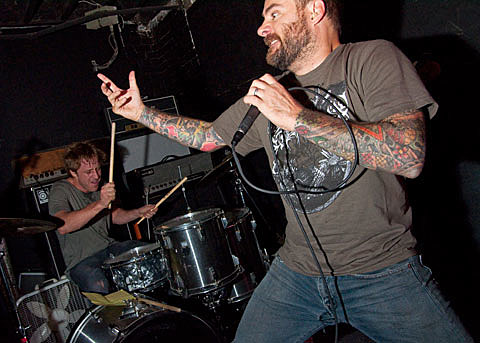 After releasing their punishing self-titled LP with 20 Buck Spin (and playing an equally punitive live show at Acheron), Megasus is back to release a new 5" mini-EP with Brutal Panda Records. The Menace of The Universe 5" features a pair of new tracks from the Providence beatdown artists including "Damned Hammer" and the title track, which is streaming below. Guitarist Ryan Lesser is responsible for the (impressive) artwork duties on the release, which will include die-cut six-panel packaging. You can see the art and pre-order the EP at Brutal Panda's site.

Megasus, the only band that has the distinction of having a record on Brutal Panda and 20 Buck Spin all while having a song in Rock Band 2, currently have no dates on their calendar. Neither does Lightning Bolt who share drummer/bassist Brian Gibson.

In between working on his fretwork and art for the upcoming release, Ryan Lesser also found time to tell us what his favorite things were in 2010. Check out that list while you listen to the song stream for "Menace Of The Universe" below. 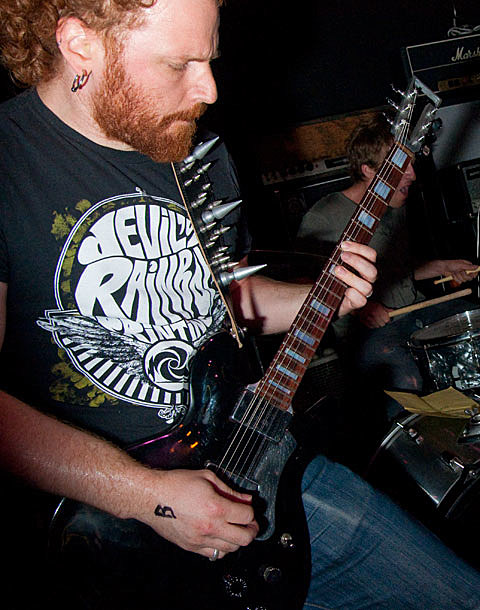 Top 20 Music Things in 2010: Records, Shows and Gear by Ryan Lesser by Megasus

1. The Body - All The Waters Of The Earth Turned To Blood LP - The first 10 minutes of this LP are the best 10 minutes of Metal this year...hands down. Guest singers the Assembly of Light Choir sing just long enough for you to forget that Chip and Lee are about to blow your fucking head off.

2. USAISAMONSTER - Space Programs LP- Originally released on LP in 2009 but new to me in 2010. This is one of my favorite records ever.

3. Grado SR125 headphones - After lusting after these for about 10 years, I finally plunked down 125.00 for these headphones. These will seriously change your appreciation for music. I have not heard anything better, ever. These also double as top notch recording headphones as they are super flat and clear.

4. Flaming Lips - Dark Side of the Moon record store day LP - Who would have thought that anyone could redo this album and have it be relevant and as spooky as the original? Not me.

5. SUNN 1200S tube amp - I have never been able to find a second head that could hold a candle to the 70s Ampeg V4 that I have had since the early 90s but this one sure as hell does. Splitting my signal to both gives me the midrange gut-punch of the V4 and the Sunn's bowel shaking low end that would make Nicola Tesla proud.

8. Agalloch Marrow of the Spirit - These both occupy this space on my list as they both fill the same exact spot in my listening urges. Experimental, blackened and non-obvious metallo-time.

9. Metallica Ride The Lighting 33rpm - Totally missed this when it came out. I have accidentally and purposely played records on the slow speed forever but this is one of the more successful slow-downs. Killer Doom record. Go straight to For Whom The Bell Tolls.

11. Watain - Lawless Darkness - JUST got this. Excellent music, album art and fontography. I love when bands take the time to put together a killer complete package. I have only seen Zbigniew Bielak's art in the CD so far but I should be getting the vinyl in any day now. PSYCHED!

12. The Sword - Warp Riders LP - While I could do without the one pseudo-Thin Lizzy track, the others are really good. Extra credit for having some of the best album art of the year, created by artist Dan McPharlin.

13. Christian Mistress - Agony & Opium LP - This took a few listens to grow on me but now it is a staple for long drives. Seeing these guys live also helped solidify it for me. It is like one of those Marvel What-If comics with The Scorpions and Heart becoming a single band and guitar soloing across the universe.

14. Sweet Cobra - Mercy LP - I found out about these guys during a visit to Kuma's in Chicago where their first LP was up on the wall behind the bar. Lots of Torche/Floor-ish goodness.

15. Tweak Bird - Tweak Bird LP - This is the full length follow up to the Reservations EP. Good grooves and weirdo outer space sounds. Dig it.

16. Sleep live in NYC - GAH! SLEEEEEP! I did not think that I would ever get the chance to see these guys live but I did and they killed it.

17. Cough - Ritual Abuse LP - Cough was unknown to me until I was commissioned to make a poster for their Dallas show. I bought some music to listen to to get into it and now...I am really into it.

18. VPI HW-16.5 Record Cleaning machine - Do you like records? Do you clean your records? If you don't clean them then you don't truly like your records. Clean all the crap and dust and shit out of the records and make them sound the way they were supposed to. The difference between clean and dirty records is huge. (added bonus: a record cleaner can bring dollar bin records back to life).

19. Torche - Meanderthal Demos 10" - Songs For Singles is great but I admit that I like this collection of demos for Meanderthal even more.

20. Vader live in Providence at Club Hell - This was heavy and awesome in an old school way. Super, super fun. Y'know, all this time I thought to myself "I wonder what the original Vader was that was so cool that both Star Wars and Metal bands refer to it." I looked it up... the band took the name from Darth Vader. No mysterious origins. Bummer.