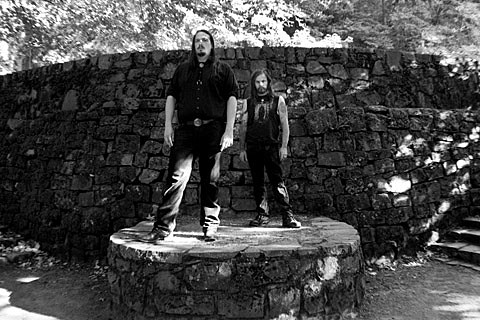 A band like Megaton Leviathan should have balls of steel if they're going to name themselves as "heavier" than the established Jef Whitehead band of the same name. But that comparison is "apples and oranges"; MT have nothing to do with black metal, save for borrowing some of its eerie, depressive, and sometimes psychedelic tendencies on their newly reissued demo out now on limited-to-500 vinyl via Volatile Rock Records. The Portland pair instead explore the darkest reaches of doom, using reverb-heavy riffs and drone-y darkness on tracks like the appropriately named "Guns & LSD", streaming below.

Megaton Leviathan have no NYC date in stores so far, but have arrived on the East Coast just in time for them to hop on the Wolves in The Throne Room tour TONIGHT (9/15) in Philadelphia with Vit (Thou's last date with WiTTR was last night at DBA, pics forthcoming). All tour dates and that song stream is below.