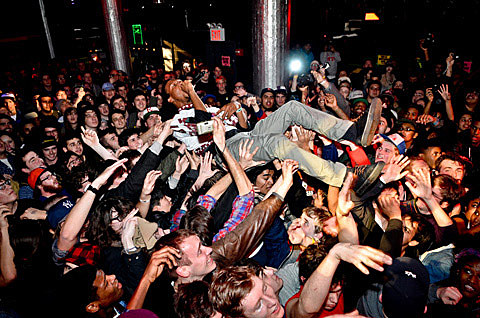 As mentioned yesterday, "MellowHype (Hodgy Beats & Left Brain) just announced that they will be re-releasing their most recent record, 'BlackenedWhite,' with two bonus tracks. No details on a label or signing yet, but I'm sure it won't be long before we hear more." As announced today:

MellowHype (OFWGKTA) sign to Fat Possum for a hard release of BlackenedWhite. It was originally featured on Odd Future's website back on Halloween and has since been remixed and remastered with bonus content for a physical release on CD and Vinyl this summer.

In related news, Toro Y Moi recently dropped a remix for Tyler The Creator's "French" from the Bastard LP (download it above/stream it below) and Funny or Die posted a video of the crew getting signed that features Paul Scheer and many others. Check out the video alongside the song stream below.