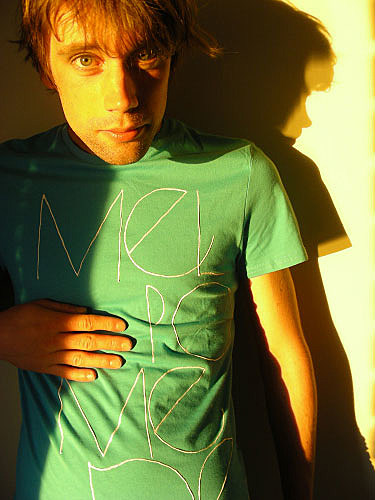 Sweden's Loney, Dear has just left Sub Pop for Polyvinyl, who will release his new album, Dear John, on January 27 (track list below). Before that, they're playing a couple of NYC shows in December. As nice as it will be to have them back on these shores, I'm slightly more excited that opening for both shows will be fellow Swedes Melpo Mene who make some very lovely, understated folk-pop. breathy vocals, jazzy arrangements - it's lovely stuff. I liked his 2004 debut, Holes, quite a bit and have been waiting for him to follow it up ever since. BV Mike also did a nice feature on this very site back in February.

Melpo Mene's second album, Bring the Lions Out, just came out in Sweden on Imperial Recordings (home of Jose Gonzales) and you might have heard the album's first single, "I Adore You," in a Volvo ad. (Not my favorite song on the album but the appeal is obvious.) Hopefully these New York shows will bring some attention from U.S. labels though you can get both Melpo Mene albums Emusic. In addition to the two shows with Loney, Dear, Melpo Mene will also be playing a show at Rockwood Music Hall.

All dates, videos and ticket links below...

Melpo Mene - "I Adore You" on Swedish TV