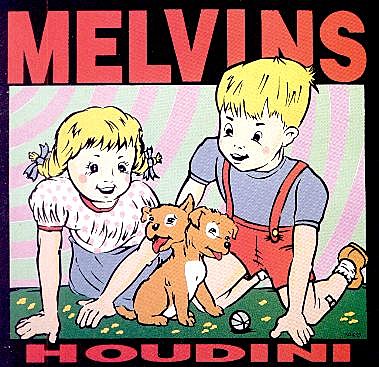 Houdini is an album by Melvins released in 1993 on Atlantic Records. It is regarded as one of the band's more accessible records. Melvins were one of Kurt Cobain's favorite bands; he is given co-production credit alongside Melvins six tracks. Cobain played guitar on "Sky Pup" right handed on a right handed guitar even though Cobain was left handed. He also added percussion to the percussion-only sprawling noise of "Spread Eagle Beagle". -[Wiki]

Well it isn't Bullhead or Gluey Porch Treatments, but it's still pretty f'n cool! The Melvins will perform the ENTIRE Houdini album, as well as selections from Mangled Demos in a special show at Webster Hall on May 15th! Tickets go on sale Friday March 6th at noon. The full list of lucky cities are below.

That's right! The Melvins celebrate their Silver Anniversary this year! Lots of fun and surprises are coming! To kick off the festivities, the boys are doing some select shows performing the Houdini record in it's entirety. One Mr. Trevor Dunn will be handling the bass duties while the B.B. boys are touring their new album "Mind The Drift". Also along for the ride is original drummer Mike Dillard. The boys will play songs from the Mangled Demos record with Dale Crover playing the role of Matt Lukin [Bass]! -[MySpace]

Mike Dillard played with the Melvins for Jello Biafra's 50th.

This is not the first instance that the band has performed all of Houdini. The band originally played Houdini as part of ATP's Don't Look Back series in 2005, later reenacting it in 2006 as A Live History of Gluttony and Lust with a live recording of a performance in California.

The other half of the Melvins, aka Big Business, will NOT be along for the trek, and are currently prepping their new album Mind The Drift (vinyl due on Mar 31st). Big Business is twittering about it.

In other Melvins news, the band is teaming up with Mr. Brian Walsby to create Manchild 4, "100 pages of illustrations and stories from a comic artist who's been poking fun at subversive youth culture, pop culture, your favorite band, and himself since the early 80s". Included with Manchild 4, "an in depth Melvins 2008 tour diary" and Pick Your Battles, a "15 song CD of live Melvins tunes recorded in 1989 at the 924 Gilman St. Project in Berkeley, Ca. and in 2008 at the Paradise Rock Club in Boston". Schweet. There are only 3000 of those so order them here NOW.