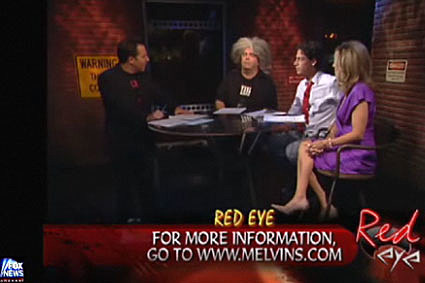 Well, except until moshers possibly cost everyone an encore. Buzzo was clearly irritated but expressed it calmly and with his trademark humor:

"I'm not Wavy Gravy. It isn't all about peace and love"

"Captain" Jared (also of Big Business) looked a little more peeved and menacing. Even while wearing a white suit and an utterly ridiculous sailor cap.

"Are you gonna' apologize to that girl you just kicked in the head?"

The discussion went on for another minute or so and in alot of ways reminded me of the "ice cream eating motherfucker" incident captured on the Fugazi Instrument DVD.

Until that moment (and after that) the Melvins were, as the Brits might say, "smashing". Tighter than a Kim Kardashian skirt, the band covered most of (A) Senile Animal and Nude with Boots, even paying tribute to The Who by covering "My Generation" in a way that only they could. The Dale Crover/Coady Willis two drum attack, while in alot of ways unnecessary, sounded fantastic in that room, but dwarfed the guitars. Buzzo and Jared's voices mesh together seemlessly and judging by the current poppy-Melvins phase the band is going through, Jared is a great addition on bass.

After "the incident", the band closed with Bullhead fave "Boris" (yes, the one that the band takes their name from) closing with Buzzo solo on guitar. I have seen my share of shows (of varying genres) at Bowery, and rarely have I seen a show peppered with as many whistles and "woo!"s as on Thursday night... Great, but I also could have used a little bit of Houdini or Stoner Witch era jams.

The same lineup played Music Hall of Williamsburg in Brookln one day earlier. Buzzo also appeared on Fox News yesterday. Video from that is below...