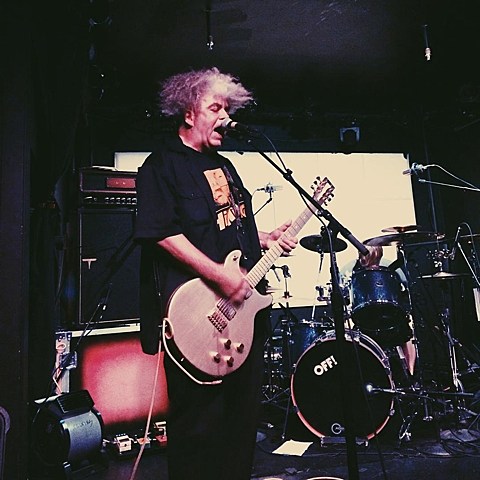 The Melvins are the consummate road warriors. Look at your local concert listings chances are you'll see Buzz Osborne, Dale Crover and company coming up somewhere in the not-too-distant future. It is this relentless attitude towards being a working band that presumably led the The Melvins to complete a tour that took them through all 50 states and Washington DC in a mere 51 days back in 2012. Now there is a documentary about the trek coming out on DVD. It's called Across the US in 51 Days: The Movie, it's out on November 13, and it is not to be confused with either of the other two upcoming documentaries about The Melvins.

Meanwhile, The Melvins are in the midst of playing two shows in one week at LA's The Echo (clearly they're slacking), and I caught the first, which took place on Saturday (10/24). The opener was Field, who played a set of basically nondescript acoustic guitar songs that served the main purpose of getting the crowd really anxious to see the Melvins (to his credit, he did cover Iron Maiden though).

Once the Melvins took the stage, it was time to get serious at the sold-out Echo. Buzz, wearing his signature glittery robe, was joined by the "Melvins Lite" lineup, which is the trio of Buzz, Dale and Mr. Bungle bassist Trevor Dunn, who plays standup bass. It was that lineup's first show back since 2012 when they played the aforementioned 51 shows in 51 days. It is certainly a bizarre sight to see Buzz shredding away alongside a standup bass being played with a bow, but of course the band ripped just as much as you would have hoped, and Dunn's ability to play those songs on that thing just adds a further element of impressiveness to the whole thing. "This guy is one fun motherfucker to play with," opined Buzz during an interlude in which he spoke for a solid 5 minutes while the band played a funny blues progression behind him. "Be honest, how many of you actually recognized that Iron Maiden cover?" he asked the crowd, before eventually concluding "that's why I never talk at these shows."

As for the set, they ripped through a ton of material from throughout their history, although there was probably more stuff from the past 10 years than from any other period. They hit "Hooch," which was a definite highlight, and they covered Paul McCartney's "Let Me Roll It," which is actually sort of a perfect Melvins song. And Buzz and Dale are just inhumanly tight, displaying the kind of musical synergy that can't be faked and only comes from playing together for as long as they have (Dale's may have also been the loudest drums I've ever heard at a show). Buzz is such a good frontman; his guitar carries the songs and he's never standing still, bobbing and weaving and generally commanding your complete attention, even as your head is banging uncontrollably. This was a professional show by a professional band, and I for one could use more of those.

Tickets for the Melvins Halloween show at the Echo are on sale now (that one will feature Jeff Pinkus on bass). Oddly enough, that and a November show in Tokyo are the only currently scheduled dates for The Melvins.

Check out audio of Melvins covering "Let Me Roll It" back in 2013 below...