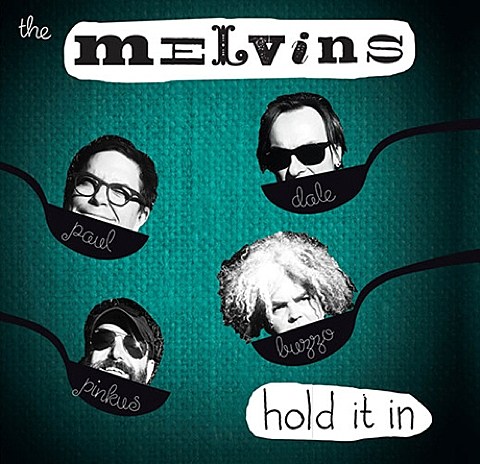 The first taste of the Melvins' Hold it In, the new album featuring Paul Leary and JD Pinkus of the Butthole Surfers, has hit the web. "Brass Cupcake" is rather rocking, definitely fitting into the more streamlined material of both bands' careers. It's also something of an earworm, with its Kiss/Cheap Trick guitars spinning sugar that will buzz your brain for the rest of the day. According to drummer Dale Crover, that was the intention: "Brass Cupcake is possibly my favorite track on Hold It In! We wrote this song with Pinkus and Paul in mind, once we knew this project was a go. It's our version of what we think pop music should sound like. Get ready to freak out!" Will do. Hold it In is set to drop on October 14 via Ipecac Recordings and it's available for preorder now. Those that do will receive the song "Bride Of Crankenstein" as a bonus.

This version of the Melvins -- minus Paul Leary -- will heading out on tour in October. Drummer Dale Crover is actually currently on tour with OFF! who play NYC's Europa tonight (8/22) with Bad Antics and Gay Kiss (tickets). Dale Crover was also in the studio recently for a forthcoming solo 7" on AmRep titled United Fruit which also features Lou Barlow (Dinosaur Jr, Sebadoh) and Kevin Rutmanis (Cows, Melvins, Tomahawk). You can stream the title track below.