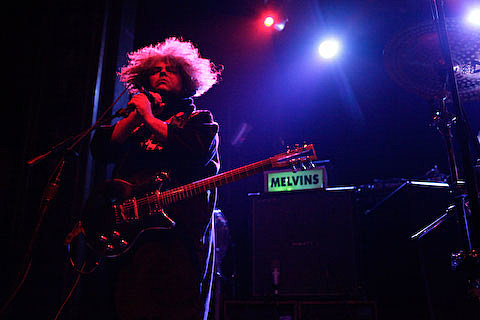 The Melvins survived TWO earthquakes in the past month or so. The band was in Christchurch, New Zealand during that fatal quake and in Tokyo when the quake happened in Japan. And though Melvins won't be playing it, their label Ipecac Recordings is involved in the sold out Japan benefit concert happening on Sunday, March 27th at the Miller Theatre at Columbia University in New York City with label co-head Mike Patton, and John Zorn and Sonic Youth, Yoko Ono, Sean Lennon, Cibo Matto with Mephista, Marc Ribot, Uri Caine & Zorn's Aleph Trio, and more.

The Melvins have however announced special shows that are like what they did at Spaceland in LA in January. The'll revisit some of their classic LPs over two nights in different cities as part of what looks like a TBA a tour that includes shows at The Crocodile in Seattle, somewhere The Mohawk in Austin, and Music Hall of Williamsburg in Brooklyn on June 6th & 7th. On the first night they'll play Lysol, Eggnog, and Houdini in its entrety, and on the next they'll feature Bullhead & Stoner Witch. Tickets for both Brooklyn shows go on AmEx presale at noon on Wednesday, 3/23, and regular sale on Friday. UPDATE: All dates now announced and listed below.

The band are also prepping to release another live album. Sugar Daddy Live will be out May 31st via Ipecac Recordings. The tracklisting is below with some videos...