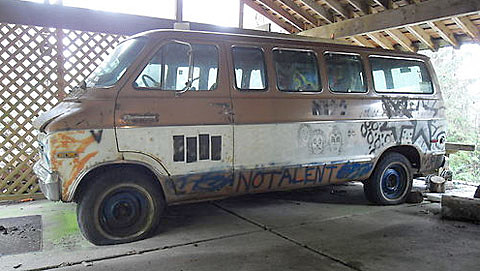 1972 Dodge Sportsman Royal Van, better known as the "MELVAN" Featured in many books, Cobain Unseen, Come As You Are ETC. & Many NIRVANA documentary films. This is a very unique piece of MELVINS/NIRVANA history & truly one of a kind. The KISS Mural on the side was hand drawn by Kurt Cobain using sharpie markers shoplifted from the Thriftway grocery store in Montesano Washington. (former employer of King Buzzo) This was one of the first MELVINS tour vans & was used on at least one U.S. tour. Kurt himself was often times known to drive this van to local shows, also included are two former registration's, one signed by Roger Osborne (King Buzzo) & the second signed by former MELVINS bass player Matt Lukin ! Bid High & Bid Often ,this will probably be your one & only chance to own this unique piece of music history !

Place your bid on the the "Melvan" at Ebay now. Maybe you can get Buzzo/Dale to sign it at their upcoming dates with Unsane.

In other news, Nirvana's former manager is part of a group that is "planning to pour substantial funds into the Occupy Wall Street movement in hopes of sustaining the protests and fostering political change."