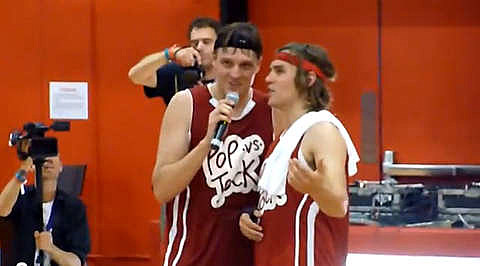 I remember as a kid, the Jaycees chapter in my hometown put on a "donkey basketball" game at the Junior High gymnasium and local "celebrites" (politicians, radio DJs, probably teachers) played. Donkeys are stubborn, as you know, and these non-atheletes fell off their animals pretty much every time they threw or caught the ball, and most times in between. It was HILARIOUS. And it went to a good cause.

While there are (thankfully) no donkeys involved, folks attending this year's Pop Montreal fest (Sept. 19 - 22) can see a bunch of fairly famous indie rock types (plus a couple ringers) wheeze down the court for "POP vs Jock : Charity Basketball Game" which happens on September 22 at McGill University Sports Centre.

The Arcade Fire's Win (6'4") and William Butler will lead Team Pop which includes Martin Starr (Freaks & Geeks, Party Down), Nikolai Fraiture of The Strokes, actual pro basketball player Luke Bonner and others; Team Jock will be members of the McGill Redman and Concordia Stingers. Soundtracking the game will be Kid Koala, Régine Chassagne, with a halftime show featuring David Byrne & Moment Factory. They did this last year too.

Tickets are $20 (for regular folks) or $1500 for corporate donations and can be purchased here.