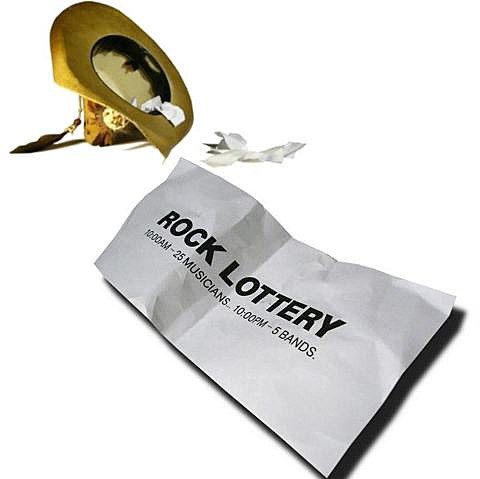 The fourth-annual Brooklyn Rock Lottery will happen December 7 at Knitting Factory. As before...

The premise is simple, but effective. Twenty-five hand picked musicians meet at 10:00AM at the evenings performance venue. These volunteers are organized into five groups through a lottery-based chance selection. The five separate groups are then released to practice at different locations. The musicians have twelve hours to create a band name and three to five songs (with a one cover-song limit). The groups will then perform what they have created that evening in front of a waiting audience.

While the full participating musician list hasn't been released yet, look for this year's Rock Lottery to include members of Small Black, Here We Go Magic, Porcelain Raft, Balkan Beat Box, Oneida, The Make-Up, Rainer Maria, and Cave In. Tickets are on sale now and all proceeds benefit the Willie Mae Rock Camp.

I went to last year's Rock Lottery and thought it was a lot of fun. You can check out a video feature on it below.